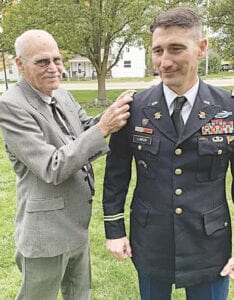 His shoulder stripes and rank pin were pinned on by his mother and father, Bethany and Caryl Stimson.

Stimson grew up near Otisville and was an excellent athlete throughout his life and during high school where he lettered in four different sports.

The LakeVille community is very proud of Stimson, who may be the highest-ranking Military Serviceman in the history of Otisville, according to friends and family.

He is an Army Ranger and has been stationed overseas many times throughout his career and is currently at McDill Air Force Base in Tampa, Florida.

His ceremony was arranged by Commander Steve Bourcier of Otisville’s Ezra Paul Post 321 of the American Legion. An official flag ceremony accompanied the event.

Several awards and certificates were given to Jacob by LakeVille Schools, Forest Township, Genesee County Commissioners and the State American Legion. He was accompanied by two other Army personnel from McDill. 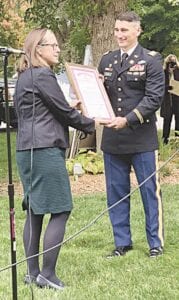