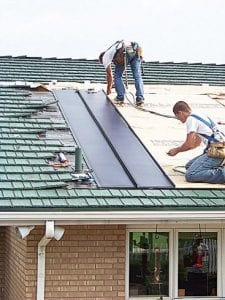 Workers install the solar roofing system on a house. The Freedom Solar Roofing system provides roofs that generate electricity, giving the homeowners the ability to go green and save money.

FLINT TWP.
— With the push to go green becoming widespread across the country, one local business offers its clients the opportunity to not only go green, but save money on electricity bills.

Freedom Solar Roofing provides essentially provides roofs that generate electricity. The solar roofing system serves the dual purpose of roofing and power generation. Unlike other solar roof systems that sit on top of the shingles, the Freedom Solar Roofing System becomes a part of the roof and does not need to be removed or replaced during re-roofing. Based on a product from Germany, the Michigan-made product, which is for residential roof, is a building integrated photovoltaic system (BIPV) panel that delivers 20 percent more energy per watt than monocrystalline or polycrystalline products. 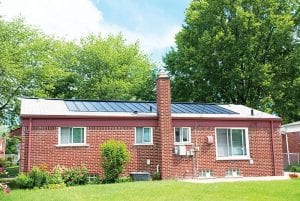 The solar roofing system also is a pre-engineered product, qualifies for federal tax credits and has been installed on the Universal Design Living Laboratory (UDLL), a national demonstration home of the future.

“The product is unobtrusive on the roof, and people are struck by the simplicity of it,” Farmer said. “They are used to having big banks of batteries, which is no longer the case.”

So far, system has been installed on more than 30 homes, primarily in southeast Michigan.

“The product has mainly been installed for DTE customers,” Farmer said. “DTE offers a rebate to customers through its Solar Currents program.” With the Solar Currents program, DTE Energy offers incentives to its electric customers who install photovoltaic systems with a capacity of one kilowatt (kW) to 20 kW. The program offers an up-front rebate of $2.40 per DC watt and a production incentive of $.11 per kilowatt-hour for the renewable energy credits (RECs) produced by the system over a 20-year period. The typical system installed for residential use is 3.2 kW, or 3,200 watts, and the cost for the solar roofing system varies by the job since “every home is unique; there is no average price,” Farmer said.

Besides saving money, the solar roofing system adds value to a house. Citing a report done in California, Farmer said that for every $1 in energy saved, it added $20 in value for the resale of a house. “If you saved $1,000 a year, the value of your house would go up $20,000,” he said. The expected life span of the solar roofing system is 30-40 years, and comes with a 25-year warranty.

Farmer said potential customers have a variety of questions regarding the solar roofing system, ranging from “Does the roof have to face south?” to “Can the system be installed on any roof?” Farmer said it is not necessary for the roof to face south; roofs that face the east, southeast, west and southwest are fine. The system can be installed on any roof, including metal, cedar and tile. “It integrates into all,” he said.

Overall, Farmer said business has been good for Freedom Solar Roofing. “Our customers love the opportunity to save money, and they feel like they are making an improvement in the planet,” he said. “They’ve gone green, and done something for their children and their grandchildren.”

Individuals interested in Freedom Solar Roofing can contact the company for free estimates, and receive a site inspection to see if there is enough roof available; the roof is in the right orientation to the sun; and if it will be cost-effective to the homeowner.

Freedom Solar Roofing is located at 6140 Taylor Dr. Details or for a free estimate, call 866-763-9117 or visit www.freedomsolarroofing.