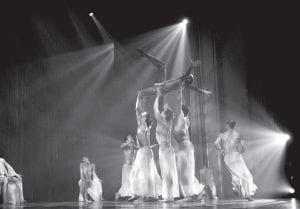 Complexions Contemporary Ballet has been featured at many notable theaters, including those in New York, Los Angeles and Washington D.C.

FLINT — The Whiting Auditorium presents Complexions Contemporary Ballet on Saturday, Jan. 14 at 8 p.m. Ashley Schoen, marketing and communications manager of the Whiting said audiences are in for a real treat.

“This is a unique and high energy performance that will resonate with those familiar with contemporary dance, as well as offer an exciting introduction to those new to the genre,” Schoen said.

Complexions Contemporary Ballet’s capstone is artistic directors Desmond Richardson and Dwight Rhoden’s lifelong appreciation for the artistic and aesthetic appeal of the multicultural. The two former Alvin Ailey members founded the group in 1994. The New York based company also consists of roughly twenty incredibly trained classical and contemporary dancers, and features guest artists on occasion. The dancers combine classical, modern and contemporary dance, and even dance to mainstream music.

Complexions has appeared throughout the U.S., including at the Lincoln Center in New York, the Mahalia Jackson Theater for the Performing Arts in New Orleans, Paramount Theatre in Seattle and the Music Center in Los Angeles. In 2017, it will make its debut at the Kennedy Center in Washington, D.C. The group has received numerous awards, including The New York Times Critics’ Choice Award.

“The Whiting is continuing its tradition of bringing the best and most unique live performance to the region and providing a full spectrum of quality arts,” Schoen said.