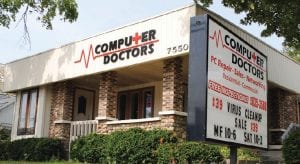 SWARTZ CREEK
— While most 20-year-old college students are busy studying or trying to find jobs as they contemplate what they want to do with their life, one 20-year-old Genesee County native is running his own business.

Ryan L. Everson, a 2008 Davison High School graduate, was always fascinated with computers and business, and while in high school, the selftaught computer guru began working for a computer store, Davison Computers, in Davison.

The day after he got out of school, at the age of 18, he opened his own computerrepair business, Computer Doctors, now at 230 N. State in Davison — in his former employer’s location.

Everson is no stranger to the Swartz Creek area, his grandmother has lived here for more than a decade. In December 2009, he opened his second location in Swartz Creek, at 7550 Miller, at the former NTouch Therapeutic Massage building.

“I was looking to expand, and I am familiar with this area,” he said.

Everson said the secret to his success is quality, quick and friendly service and cheap rates. Computer Doctors is unlike other computer repair stores. Everson decided to eliminate the standard “bench charge” that other stores charge, and offers a free, pickup service for senior citizens. As a special, Computer Doctors currently offers a virus removal sale.

While he’s not at work, Everson attends Northwood University in Midland, working towards a business management degree that he hopes will allow him to further enhance his business knowledge and his company’s potential.

Despite his busy schedule, Everson also travels across the country several times a month speaking with the Extreme Entrepreneurship Tour at colleges such as Grand Valley State University, University of Wisconsin, University of Missouri, Louisiana State University, Porterville College in California and others. He connects with thousands of college students telling his inspiring story and giving them the motivation needed to embrace entrepreneurship and possibly open their own business one day.

Everson’s dream is to continue to grow his existing locations plus open a chain of stores and to someday create a nation-wide franchise.