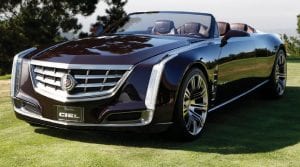 The time has come, the CEO said, for building the Cadillac Ciel, a concept car that was first seen in 2011. At least that’s what USA Today is saying. According to that newspaper, GM CEO Dan Akerson said the Ciel will go into production within the next two years.

Cadillac spokesperson David Caldwell said, “It shouldn’t come as a surprise that we are planning new product. We are in the midst of building the brand worldwide. I will say that right now we are busy getting ready to launch a lot of new product in the next six months to a year and that’s what we’re concentrating on at this moment.”

The Ciel – pronounced “C-L,” the French translation for sky – is a four-seat convertible, and was first shown in Pebble Beach, Calif., in 2011.

The specs released in 2011 describe the vehicle as a four-seat convertible that “opens a new chapter in Cadillac’s design and product ascent, pushing the brand’s Art & Science philosophy into a new stratum. Ciel is a new expression of Cadillac’s historical grandeur, as well as a celebration of open-air motoring.”

GM described the Ciel having doors that “are French-style, with the rear doors hinged at the rear – there is no B-pillar – to reveal a sweeping view of the dramatic interior. Distinguishing fender lines run from nose to tail, and nickel-plated bright work accents the body lines, enhancing the visual length of the car and honoring Cadillac touring cars of the past.”

Caldwell said that more information on the Ciel will be re- leased as time goes on, but for now, GM is keeping quiet on the exact details.