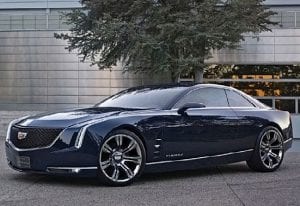 Cadillac officials say the car showcases a new vision for luxury driving and the top of the brand’s expanding range.

“Cadillac is fueled by the creativity of our designers, led by Ed Welburn,” said Bob Ferguson, senior vice president, Global Cadillac. “Elmiraj provides a look inside the Cadillac Studio on how we envision performance and luxury for the next generation of luxury drivers.”

A modern update to the classic format of a two-door grand coupe, Ferguson said the Elmiraj is a pure expression of streamlined design and engaging rear-wheel drive performance.

Elmiraj is powered by a 4.5- liter twin turbocharged V8 delivering an estimated 500 hp. The engine takes the baseline technology from the new Cadillac Twin Turbo V6 featured in the upcoming 420-hp 2014 CTS Vsport edition, and expands it to the classic performance format of a V8 engine.

“This concept is the second chapter, following the Ciel Concept, of our exploration of the personas of true luxury,” said Clay Dean, executive director of advanced design.

“We were influenced in particular by the 1967 Eldorado,” said Dean, “both its actual design and the fact that in its time that car was a very stark contrast and a new direction.

Elmiraj was hand-built by in-house craftsmen in Michigan, Ferguson said.