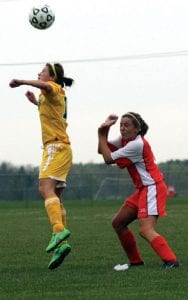 In all sports, especially those where helmets are not worn, knowing what to look for as far as concussions and subsequent treatment, and release back to play, will be part of the education offered for every high school athlete, parent, coach and athletics staff.

EAST LANSING — Already administering a strong set of protocols addressing the removal and return to play of young athletes suspected of sustaining concussions in competition, the Michigan High School Athletic Association is further ramping up its concussion education efforts of coaches, student-athletes and parents as the 2012-13 school year approaches.

In partnership with the University of Michigan’s NeuroSport and the Pediatric Trauma Program at C.S. Mott Children’s Hospital, required online rules meetings for coaches and officials will include an education component illustrating the serious nature of concussions; recognition of the signs and symptoms; a review of return to play protocols; applicable MHSAA regulations; and downloadable co-branded resources from NeuroSport, as well as materials produced by a joint effort of the Brian Injury Association of Michigan, the Detroit Lions, the Center for Disease Control and the MHSAA.

This is the second year the MHSAA has included concussion education in its online rules meetings, which are annually viewed by nearly 20,000 coaches and game officials. This year, the Michigan NeuroSport Concussion Education – High School Coach edition, endorsed by the American Academy of Neurology last fall, has been modified for the MHSAA audience. The MHSAA will also promote the availability of the NeuroSport concussion education modules offered specifically for parents and coaches.

“These educational efforts, coupled with protocols addressing concussions when they take place on the field of play, put our schools in the best possible position to minimize the risk to young people,” said John E. “Jack” Roberts, executive director of the MHSAA. “We’re pleased to have our new partnership with University of Michigan NeuroSport and our ongoing partnership with the Brian Injury Association of Michigan which put our state at the forefront of addressing the critical health issue for interscholastic athletes.”

Roberts added that the same educational materials the Association has co-branded with its partners will also be used to help raise concussion awareness in other youth sports by other sponsors in the state.

“We are proud to partner with MHSAA and bring the most up-todate concussion education to those on the frontline of athletics. Education is a vital component to improving player safety,” says Amy Teddy, injury prevention program manager at C.S. Mott Children’s Hospital. “We believe that ‘It takes a team to keep concussions on the sidelines.’ Parents, coaches, teammates, officials and athletic trainers all have a role in protecting athletes from serious injury.

“In addition to our coach modules, we recently launched our parent edition to help another member of the ‘team’ better recognize and understand concussion.” added Teddy, who also is director of education for Michigan Neurosport.

The NeuroSport online programs for parents, high school coaches and youth sports coaches is now available at www.MichiganNeuroSport.com . An online program for athletes will be available soon.

NeuroSport has also produced a 60- second public service announcement in which one of the state’s all-time winningest football coaches—John Herrington of Farmington Hills Harrison—talks about concussions. This video, along with a 30-second PSA recently updated by the MHSAA, “No Such Thing As Just Getting Your Bell Rung,” will be made available to media outlets in time for the coming sports season, and will be shown during MHSAA programming online and on cable television.