Condemned house gets one last chance 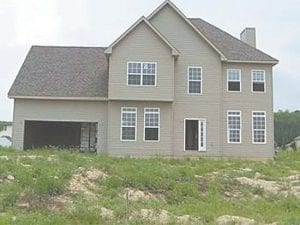 Township officials are granting one final chance for developers to complete construction on a long-vacant home on Vivian Drive.

FLINT TWP. — A half-finished house at 1085 Vivian Drive, already under court-order for demolition, has been granted a conditional reprieve.

The township board has approved an offer from a developer interested in rehabbing the 2,700 square-foot that was built in 2014 but not completed in the Country Ridge subdivision off Calkins road between Dye and Elms roads.

The two-story, four-bedroom home sat vacant for seven to eight years while township officials negotiated with previous developers – Calkins Road Development – to either complete it or tear it down.

A court order for demolition was issued last year but has not yet been executed. The developers failed to comply with a court order to rehabilitate the house by September 30.

Granting one last chance, the township board unanimously approved a contract with a different developer – Vash Investment Group of Burton – to rehabilitate and complete the house by October.

The agreement required a $10,000 escrow payment to the township that will be used to tear the house down, if developers do not follow through with the rehab by the October deadline, said Tracey Tucker, township building director. Vash plans to renovate the home and sell it to a third party. The house is one of several in the subdivision that were not completed by Calkins Road Development. It is surrounded by about eight occupied homes. Tucker said that she and township attorney Peter Goodstein hammered out details of the contract with Vash. “Our main issue was a bond to cover demon if the house isn’t finished by a certain date and determining that date,” Tucker said. According to the contract, Vash agreed to properly renovate the house and to obtain a certificate of occupancy for it by October 31 of this year. Before Vash is allowed to proceed with renovating the house, the township will need to petition the Genesee County Circuit Court to vacate the previously entered “Demolition Order.”

After the real estate closing, Vash is required to provide the Township with $10,000.00 cash or a cashier’s check that will be held in a separate, segregated account and not as part of the General Fund.

The contract also stipulates that Vash not market the completed house as “new construction” but rather that it was first constructed in 2014.