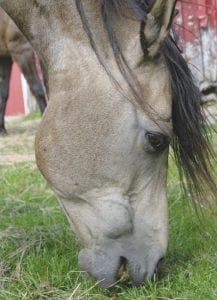 The grass may be greener, but that doesn’t mean it doesn’t have hidden dangers for horses.

AREAWIDE
– As a 21-year horse owner I thought I had seen it all.

It’s not a new disease, but it has reared its obnoxious, irritating head this year because conditions were just right for it to form in pastures and hay fields.

It’s called Slobber Mouth, the Slobbers, Black Patch Disease and several other monikers, but it’s a fungal disease caused by Rhizoctonia leguminicola forming on red or white clover and alfalfa in pastures and in baled hay. It causes profuse salivation and slobbering in horses, livestock and llamas.

My vet, Dr. John McIllmurray, knew what I was dealing with before I even finished my sentence a few weeks ago. I too, like most others, had brought the horses in after seeing them excessively licking their lips and slobbering uncontrollably. Alarming to say the least.

Dr. John says that conditions where there is a high moisture count kicks the fungal process into motion. You can’t see it unless you get down and inspect the leaves of the clover, which will have brown or black spots on the leaves. It causes a very irritating reaction in the horses’ mucous membranes.

Cold water, preferably through a hose helps to stop the symptoms, but even then they can occur for up to 24 hours or longer, often leaving the animal dehydrated. Pregnant mares can abort if they continue to eat the noxious clover.

Now, like many that don’t make a habit of offering water to their equine friends through a hose, ours objected. Not wanting to add to their stress, we found Popsicles to be quite an immediate solution, as the frozen treat was palatable and didn’t prove to be a threat once the wrapper was removed. We all know how goofy horses can be about crinkling paper and plastics. You can also take a large syringe and flush cold water directly into their mouths to help relieve the irritation, similar to paste worming, which most horses are quite comfortable with. Once they feel the relief, most will stand pretty calmly for this. Offering water as cold as you can make it also helps, but as we all know, you can lead a horse to water, but can’t make them drink. Getting the water into the mouth is the key to relief.

It also was recommended that we mow the pastures, which we did, and we locked the horses out for a few weeks, mowed it short again, and let them back in. Wrong move. We ended up with slobbers again last week, this time in all three who had shared the one pasture. Two others on the other side of the barn have not been affected, nor has their turnout area. Figures.

Our farrier has seen several other cases in his travels over the past couple of weeks, with one barn owner greeting him with four slobbering horses. It’s not a major threat to the horses, unless they are pregnant, as long as they are removed from the offending plants and can get at some cold water to stop the reaction. Dehydration will require the help of your vet.