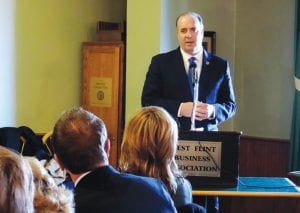 FLINT TWP. — U.S. Congressman Dan Kildee has been in politics most of his adult life but never imagined the day he would need a crash course on agriculture to prepare for getting his first congressional bill passed.

As a freshman congressman, Kildee introduced the Local Food for Healthy Families Act which was part of the Farm Bill signed by President Barack Obama earlier this month.

The Farm Bill is essentially a food bill of which about 75 percent concerns the SNAP food assistance for the needy, Kildee said last week as the guest speaker at the West Flint Business Association meeting where he talked about several legislative issues.

The bill implements a crop insurance model in which farmers only get financial support if they actually experience loss. The Farm Bill also will deliver about $100 million, five times the amount provided previously, to local growers to help provide much healthier food to people in the greatest need, he said. 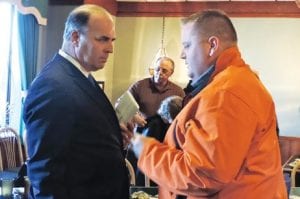 After speaking at the WFBA meeting last week, Congressman Dan Kildee took a few minutes to talk one on one with constituents.

Passage of the Farm Bill also represented one of few instances of bipartisan cooperation since he took office, Kildee said.

Lack of bipartisan cooperation has been one of the big frustrations of his first term so far, he said,

“This is about the most partisan and one might say dysfunctional congresses we have seen in a long, long time.” he said.

He cited the influence of large money donations as a factor.

“Our democracy is threatened because of the undue influence of enormous piles of money coming into our political process” he said.

Two other pieces of successful legislation receiving bipartisan cooperation were a Budget bill that ending the ongoing threat of sequestration and government shut down and a Debt Ceiling bill that prevented the federal government form defaulting on some of its obligations.

Despite bipartisan struggles there have been some successes, Kildee said.

A big one announced earlier this year, was getting the U.S. Department of Treasury to release $100 million to Michigan for blight elimination. About $23 million of that is earmarked to tear down vacant and abandoned structures in Flint, he said.

Looming ahead are battles over issues including redistricting, restoring federal unemployment benefits, immigration reform, revision of the tax code and bolstering a Make It In America plan to reinvest in manufacturing and job creation.

Kildee also fielded questions about the Affordable Care Act which will bring big changes in health care administration this year.

He shot down a persistent myth that congressional representatives required are exempt from having to enroll in the plan. He added that he would prefer to enroll in a Michigan plan but is required to buy from the D.C. exchange.

Kildee took other questions about transportation and rebuilding roads and education reform.