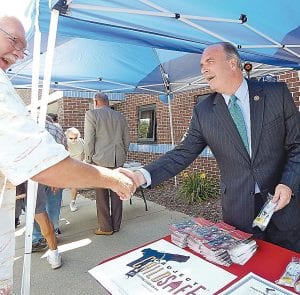 About 500 gun locks obtained by the ATF were handed out on a firstcome, first-served basis.

“I’m proud to partner with law enforcement officials today to provide free gun locks to mid-Michigan residents,” Kildee said. “The more firearms we can properly secure in homes, the less likely they are to be stolen and used in acts of violence. There isn’t one solution that will solve the epidemic of violence in our community, but promoting safe firearm practices, like we are doing today with free gun locks, is a step in the right direction that will make Flint and surrounding communities safer.”

On July 22, Kildee sent a letter to B. Todd Jones, the now-confirmed Director of the ATF, imploring the bureau to deploy additional law enforcement resources to help curb the escalating rise in violent crime in Flint. The letter follows up Kildee’s request in April for $75 million in increased funding in Fiscal Year 2014 for the ATF to help fight crime in Flint and Saginaw. This request comes as the city of Flint continues to struggle financially and has repeatedly laid off local law enforcement officers in recent years.

According to Federal Bureau of Investigation statistics, Flint is rated the nation’s most dangerous city with a population of more than 100,000 people. In 2012 alone, there were 66 homicides in the city.

“Too many Flint residents know someone, whether family or friends, that have had their lives negatively impacted by gun violence,” Kildee said. “We have an obligation to our children and to our communities to try and prevent further injury and death. Our children should be able to live in the community without the fear of gun violence plaguing them or their family.”