Controversial ordinance coming up for adoption next week 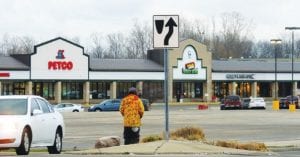 Panhandler’s last stand? This traffic divider at the entrance to the parking lot of Genesee Crossing shopping plaza on Miller Road, is among frequent spots where street beggars stand. It is uncertain how or if this is private property and if the location falls under a pending township ordinance.

FLINT TWP. — Will it fly this time? That’s the question facing the township board’s proposed Traffic Safety Ordinance due for a second reading an adoption at its January 5 meeting next week.

The proposed ordinance bans passing money into or from a vehicle that is in traffic. It is a successor to a Begging and Soliciting Ordinance that only passed first reading in July. At the second reading, a large group of protesters attended the board meeting including a person dressed as Santa Claus and representatives from charitable organizations and the American Civil Liberties Union.

After hearing what they all had the say, the board decided to table the proposed ordinance and form an advisory committee to look it over and recommend solutions to handling the township’s growing panhandling problem.

Street beggars have become more prominent since a U.S. District Court ruling in 2012 that peaceful panhandling is a form of free speech no different from other charitable groups asking for donations on public streets. In other words, if anyone is allowed to do it, everyone has to be allowed to do it.

As a result, township police stopped ticketing street beggars. But increasing numbers of them statewide have cause many municipalities to seek legal ways to restrict them.

The city of Kentwood in Kent County passed an ordinance two years ago that has withstood a legal challenge. In April 2013, a Kent County Circuit Judge ruled that the ordinance “applies to all solicitation, regardless of the message or the recipient, and it is reasonable and necessary manner of regulating traffic for the safety of motor vehicle operators, passengers and pedestrians.”

That ordinance established eight unlawful means of soliciting including “from any operator of a motor vehicle that is in traffic on a public street.” It also banned soliciting in other places such as within 15 feet of a bus stop, pay phone, or ATM machine and on private property without the owner’s permission.

Flint Township officials patterned their first proposed ordinance after the Kentwood one. But they tabled it, after the local ACLU challenged wording in the ordinance that could be interpreted as discriminatory.

Township Police Chief George Sippert, who consulted the Kentwood Police Chief, has said the key to legally enforcing the ordinance is applying it equally.

“We can’t pick on one group and not another, “ Chief Sippert said. “If adopted, we will enforce it across the board for everybody.”

Popular street begging locations include freeway exit ramps and in front of major stores on Corunna, Miller and Linden Roads.

Township officials have said that many township residents and business owners have complained about panhandling problem because they frighten some people and drive away business.

The proposed Transportation ordinance is based on an existing state law – the Michigan Vehicle Code – that prohibits interference with vehicles on public streets, unless authorized.

The township board has said that charities who want to conduct annual soliciting drives while standing in the street will have to seek permission from the Genesee County Road Commission, which is the authority for major roads in the township.

Street beggars have supporters who have spoken in their defense and publicly stated that they plan to continue helping them even if the ordinance passes.

Township Supervisor Karyn MIller has said that if the ordinance is adopted, she will ask township authorities to wait a few months before enforcing it. That will allow a grace period for violators to be notified that their actions are no longer legal. Violation of the ordinance would be a civil infraction with fines up to $500.

Miller also stressed that efforts are being made by a committee to help panhandlers find the help they need from existing social service agencies.

Detractors have accused panhandlers of being scammers who are not really needy.

Flint Township will be the first municipality in Genesee County to impose traffic restrictions on street begging.