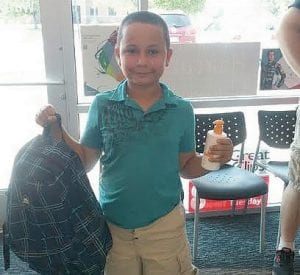 For its annual Back to School Haircut Promotion, the salon offered deeply discounted $6.99 haircuts for students and $8.99 for others.

“Considering the cost of sending kids to school, we usually give a generous discount a couple weeks before school starts for students, to make sure they go to school with a nice appearance,” Guo said.

Two grand prizes, valued at more than $50 each were awarded to two lucky elementary school students in a random drawing. Their prizes were backpacks filled with a hair care product, a T-shirt, and school supplies.

Great Clips also participated in a fundraiser for Paralyzed Veterans of America (PVA). For one month, participating Great Clips salons, mainly in Indiana, Ohio and Michigan, asked customers to donate $1-2 dollars to PVA in exchange for a $2 off coupon for their next haircut. 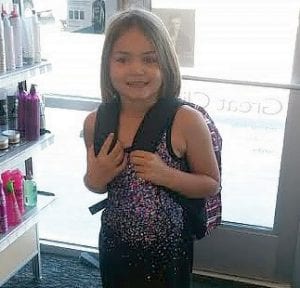 As a result, Great Clips -Corunna Road recently mailed a check for $284 to PVA, Guo said, adding his thanks for community support.

“We have been sponsoring the branch by donating money to their concert since the salon opened,” Guo said. That concert was scheduled for Oct. 7 at the Carman-Ainsworth High School auditorium, according to the VVA Facebook page.