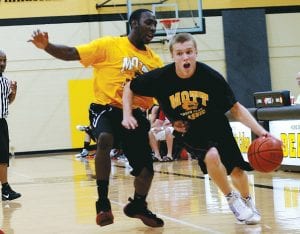 FLINT
— Recent Carman-Ainsworth graduate Glenn Cosey put on a show at the annual Mott Bruin Classic over the summer. The All-Star event features some of the best basketball players from around the area and this year pitted the City All-Stars (Gold team) against the Suburban All-Stars (Black team).

Cosey was on fire all night long as he racked up 45 points en route to leading the Gold squad to a 166-119 victory over the Black team. Cosey hit seven 3-pointers and earned MVP honors of the 18th annual event. The highly anticipated game drew more than 900 fans to Ballenger Fieldhouse. Money raised at the event benefited Mott Community College through the booster clubs.

“I was just feeling it out there,” said Cosey. “It felt good every time I released it. There’s so many good players on the team, you just expect to get 10 points or something like that. But whoever’s on fire at the moment, you just give him the ball and let him go at it.”

The Columbus State bound guard had 17 points at halftime and scored 17 in the fourth quarter in an effort to reach 50. Two other former Cavaliers made an impact in the game as well.

Carman-Ainsworth grads Dee Chapman and Jaylen Larry added 18 and 15, respectively, while Travon Mitchell of Northwestern added 27 points for the Gold. DeMarco Sanders of Flint Powers had 12, as all 13 Gold players scored.

An alumni game of former Mott players followed, with the Gold beating the Black, 128-125, on a 3-pointer by Lamar Rice with 1.7 seconds left.