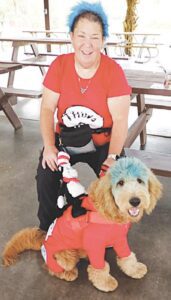 Sandi Talerico and Gizmo dressed up at Thing 1 and Thing 2 from Dr. Seuss’ ‘The Cat in the Hat’ book. Photos by Lania Rocha

“It’s a lot of fun,” said Talerico. “I get to dress him up, and they do a great job with the contest.”

The Friends of the Grand Blanc Dog Park and PACE (Pet and Animal Cremation Endearment) sponsor the contest every year at Creasy Bicentennial Park.

“It started when we were raising funds to build the dog park, and it was so popular, we just continued,” said Vanessa Ferguson, Friends member. “It’s a great opportunity for people and pets to come out and enjoy Halloween and give back to some great animal organizations in the area.”

The number of furry friends who participate varies from about 20 to 35. This year, the event drew 20 contestants in all sorts of costumes. 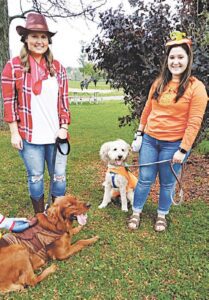 Stefanie Ronan dressed as a cowgirl to go along with her dog, Finnegan, who wore a saddle, compete with a rider. Andrea Villarreal chose a pumpkin theme for the costumes she and Alfie wore in the contest.

After hosting the contest virtually last year, the sponsors were thrilled to bring it back live and in person in 2021, with the largest number of costume categories.

Awards were given to the best costumes in a number of categories.

“It’s always neat to see what kinds of ideas people come up with, not only for the dogs, but for the whole family,” said Ferguson.

In addition to participating in the festivities, participants were encouraged to bring food donations for local animal rescues. Donations for both dogs and cats were accepted.