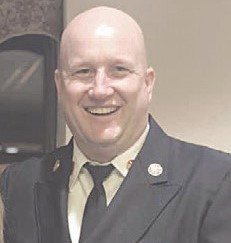 BURTON — The city clerk and assessor will see more money in their respective paychecks over the course of the next year and a half, but a decision is still pending whether the fire chief will receive any additional compensation.

At the city’s legislative committee meeting, April 5, Councilwoman Tina Conley told fellow committee members she thinks Burton Fire Chief Kirk Wilkinson deserves a $10,000 a year raise to bring him up to par with other fire chiefs around the county.

Conley said Wilkinson, who currently makes $70,000 annually, has done a great job and has been with the department for 25 years. A $10,000 a year increase would, in her opinion, make his salary comparable to other Genesee County chiefs.

She said the average salary for a fire chief in Michigan is $85,764

“I didn’t vote for the fire chief to get a raise the last time we did this because I was waiting for a new fire chief to come in,” she said. “I thought by turning the other one down, we would have the opportunity to give the new fire chief the raise he deserves”

Conley said further the median salary for every fire chief in Michigan, including full time and part time, is $78,888.

Council Vice President Greg Fenner said the council needed to understand which cities fulltime, which ones are part-time and on-call like Burton.

“There is a lot that plays into this,” he said. “Not to mention the median income of these cities compared to ours.”

Councilman Tom Martinbianco told the legislative committee he was unprepared for this conversation because originally, they were only supposed to discuss wage increases for the city clerk and assessor.

“I am not prepared to talk about the fire chief,” he said. “These are not union people and we have no obligation to give raises.”

He also said it is wrong to compare the Burton fire chief’s salary with those in communities like Fenton or Grand Blanc because of the higher State Equalized Value on homes there, compared to lower values in Burton.

Martinbianco said more discussion is needed on a raise for the fire chief before moving ahead. With the information on comparable wages around the county having just been received, he said more time was needed to look at those and other factors.

“We try our best to compare apples to apples. The jurisdiction of the administrator of that department has really got some limited necessity,” he said. “Kirk, in his own mind, feels fire service is more hands-on. We have to evaluate that, and I am not prepared to go that route.”

Conley questioned why the committee did not receive the comparable wage information in a timely manner for the meeting, adding she felt cheated because she didn’t receive what she’d asked for and was hoping to take the matter before the council immediately after the legislative committee meeting.

Fenner said he took responsibility for the timing because he said he got with the administration at a late date. Mayor Duane Haskins also said the administration had not intentionally stalled the delivery of the information Conley requested adding he was always available to discuss the matter.

Conley made a motion to send the matter onto the council for discussion and a possible vote that evening. It was approved by a vote of 2-1, Martinbianco voting against the motion.

“We all went through many hoops looking at the clerk and assessor positions. I think you (Conley) are flipping a coin and saying, ‘I’m going to do this because it is Kirk’,” he said. “You are doing this because it is Kirk. It is not. It is the fire chief. We need to do a little more investigative research. I will vote against this motion. You will get my same reaction at council.”

At the city council meeting a short time later, the fire chief’s salary was discussed along with wage increases for the clerk and assessor.

Conley said she knows everybody wants a raise, but she said she thinks Wilkinson needs to be considered because of his years with the department and his dedication to the job.

“If you look at what everyone makes, the chief deserves it the most,” she said.

Councilman Dennis O’Keefe echoed Martinbianco, saying while Wilkinson has done a good job, discussion about a wage increase should have more to do with the position – not the person.

“I respect Kirk, but we vote on the position, not the person,” he said. “I’m happy to look at this but we need a peer group analysis. It’s a travesty just to give someone an automatic raise.”

Council President Steve Heffner said when looking at the position, the council should also look at the person and the job they have done.

“We have a good fire chief,” he said. “God forbid he takes a job somewhere else.”

The council decided to have another legislative committee meeting prior to its next meeting on April 19 to discuss the fire chief’s salary, giving the entire council time to review the comparable salaries from the rest of the county.

The council then approved salary increases for the clerk and assessor.