Council outlines city’s needs this year and beyond 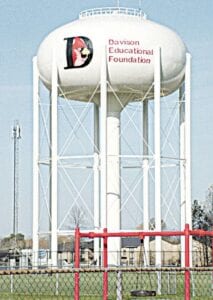 The city council met to discuss the 5-year CIP and mentioned some projects that are ahead this year.

Leanne Panduren, CEO and president of Rowe Professional Services, who acts as the city’s engineer, covered several different areas of the CIP, beginning with Buildings and Grounds.

Future plans for buildings and grounds include an overhaul of the courtyard at city hall for $65,000; new signs at the city limits for $20,000; and carpeting in the Secretary of State offices for $35,000. Those improvements are not scheduled until 2026-27.

Street repairs are also included on the CIP and the City of Davison has a few projects planned for this summer.

Scheduled in the 2021-22 fiscal year is the reconstruction of W. Clark Street which will be done in conjunction with the Michigan Department of Transportation’s planned project on M-15 at Clark Street. That project will cost the city about $500,000.

There are also preventative maintenance projects planned to various streets around the city totaling another $50,000, said Panduren.

Preventative maintenance projects, each at $50,000, are planned through the 2025- 26 fiscal year for the city, Panduren added. Future goals, currently not scheduled, include the restriping of Flint Street to three-lanes, the reconstruction of Genesee Street (W. Flint to Rising), resurface W. Rising/Dayton, Bay Street reconstruction, Lapeer Street reconstruction and Dayton Street resurfacing.

The city plans to do about $269,000 in improvements and maintenance to the water system during the 2021-22 fiscal year, said Panduren. Funding for these projects will come from the city’s water fund.

Ed Brown, supervisor for the Department of Public Works, said the city has had a lot of problems with water line breaks on Aloha Street to the west in a section of its water system that lies inside the Davison Township limits.

Brown said the section of water main in question is about 797 feet and serves 12 customers who are township residents. The city maintains is own water system operated from wells in the city limits rather than the county water system, which Davison Township is connected to.

In the past 10 years, Brown said the Aloha line has broken 10-12 times so recently City Manager Andrea Schroeder met with the new township supervisor, Jim Slezak, and there is a possibility of talks between the two communities in 2021 to do something about the water line there.

Panduren also said the city has plans to paint the water tower behind Thomson Elementary in about two years, but she said it’s something that could be done sooner.

“Quite frankly, we’ve put it off longer than we were going to,” she said. In the past, she said Davison schools have helped with he cost of painting and stenciling the cardinal on the side of the water tower tank.

For the sanitary sewer system, Panduren said the city will spend $105,000 on maintenance and improvements this year and another $106,000 next fiscal year.

Storm sewers continue to receive about $35,000 annually for collector installation tiles and repairs with some years an additional sum to cover the cleaning and televising of the system.

In parks and recreation, Panduren said in 2021-22 the city will put new asphalt around the concession stand at the softball field in the Jack Abernathy Regional Park for $38,000 and the city will spend a $20,000 recreation grant installing a Wayfinding Sign in the Regional Park.

For 2023, the city is seeking a potential Department of Natural Resources Passport Grant and local donations to build a universally accessible playscape. The total cost of the playscape, if built, would be $150,000.

City Manager Andrea Schroeder confirmed this playscape, if built, would be in addition to the existing playscape at Abernathy Regional Park.

On the city’s future goals list are uniform signs for all parks ($10,000), a permanent skate park facility ($150,000), a pavilion for the sledding hill with a fireplace and restrooms ($200,000 with a potential Passport Grant) and reconstruction of the ballfield parking lot and expansion to the north ($50,000).