Council to seek estimates for new fence at fire station 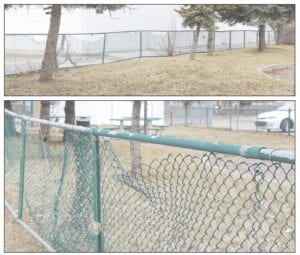 BURTON — The city council may use parks and recreation unused money, after nearly all city events were cancelled in 2020 due to COVID-19, for the construction of a new fence around Fire Station No. 1 and the Firefighter’s Park.

Councilwoman Tina Conley brought the request to use the parks and recreation funds toward a new fence at the city council’s finance committee meeting, March 15.

Conley said the city has $13,800 in unused funds from cancelled events in 2020 like the Easter Egg Hunt, the Trick or Treat Trail, the Christmas Tree Lighting Ceremony and Pizza with Santa.

That money, in addition to funds allocated to last year’s cancelled Memorial Day events, could be used to replace the dilapidated fence currently surrounding the fire station and park at the corner of Bristol and Saginaw roads.

The finance committee agreed with Conley and sent the recommendation on to the city council, which met following the committee meeting.

Councilman Vaughn Smith, who is chairman of the finance committee, said the reallocation of parks and recreation money to improve Fire Station No. 1 is a good use for the funds.

“Mrs. Conley spearheaded this passionately and she’s done a lot of work,” said Smith. “We need a new fence at water tower park.”

At an earlier meeting, Mayor Duane Haskins had asked the council to consider earmarking a portion of the unused parks and recreation funds to have in reserve in case donations for this year’s Memorial Day race, parade and fireworks dropped off due to COVID-19 affecting donor businesses.

Haskins said there is $19,200 set aside for the Memorial Day festivities and that will not be a part of the money requested for the fence. He said it is still not clear if the city will fall short in donations.

“I was requesting the funds so Memorial Day festivities could go off unhitched,” said Haskins. “I don’t know, I guess it got turned into a fence. I just was asking for help in the event we didn’t have donations.”

So far, this year’s Memorial Day events are still proceeding as planned, though state and local health officials do not know what social distancing will look like by the end of May.

Council Vice President Greg Fenner said now that Conley has perimeters of the fence she wants, the city should get estimates see what money will be needed. He said the council will need to talk to the Downtown Development Authority to see if it is going to help with the cost of the fence due to the fire station’s location in the DDA district.