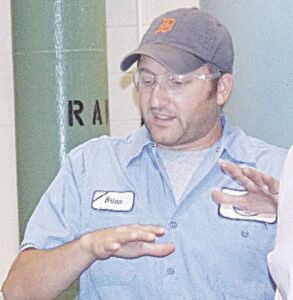 Gist, who has worked for the city 17 ½ years, was the only internal applicant for the director’s job after the recent retirement of Ed Brown.

Mayor Tim Bishop, who is chairman of the Personnel Committee, said the committee interviewed Gist prior to the city council meeting Monday and was recommending his hiring.

“The interview went really well, he answered all the questions great,” said Bishop. “He lives and dies for Davison. I’m a big fan of hiring internal people.”

Councilman Ron Emery, who also serves on the personnel committee, agreed it was one of the better interviews he’s sat in on over the years.

“Seventeen years in one location these days isn’t very common, people tend to jump from job to job,” said Councilman Chris Hinkley. “Somebody who has been committed to the city for that long is definitely worth keeping them around and keeping their knowledge in-house.”

Emery said the next step will be wage and benefit negotiations, then that package will come back to the council for final approval.

Gist thanked the council for hiring him and indicated he was ready to start his new job.

“I’m going to hit the ground running,” he said.

City Council will meet again Sept. 26 and could vote then on a compensation package if one has been negotiated by then.