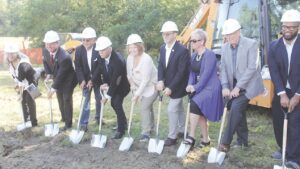 The 240-foot tower, which will hold 1 million gallons of water, should help make it so water pressure is maintained during Consumers Energy power outages which usually affect not only pressure, but lead to boil water advisories and potentially unsafe drinking water.

“When I talk about Consumer (Energy) there have been a lot of outages recently,” said Jeff Wright, Genesee County Drain Commissioner, when he addressed a group of community leaders at the recent groundbreaking at 2063 S. Center Rd. in Burton. “What we found out through that process is that when we lose power from Consumers, we lose pressure in our water system, which can lead to public health issues.

“So, one of the key things this tower will do is it does not require electricity to operate because it feeds the water through gravity. It will keep the system pressurized even if we lose power.” 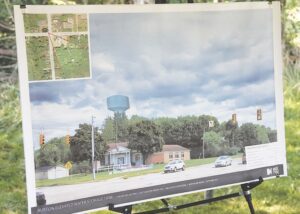 An artist rendering of what the new water storage tower will look like when completed near the intersection of Atherton and Center roads in Burton. Photo by Gary Gould

Wright said this tower is the first step in this process and promised there will be other towers in the next 18 months around Genesee County, all designed to help keep the water system pressurized.

Chris Flores, with Congressman Dan Kildee’s office, was also on hand for the groundbreaking. Kildee was responsible for securing $2 million from the American Rescue Plan Act (ARPA) of 2021 monies slated for Genesee County. The funds are part of President Biden’s plan to assist communities in the aftermath of the COIVD-19 pandemic.

“For the Congressman (Kildee), water, clean water, is one of his top priorities,” said Flores. “He’s very excited but could not be here today.”

Wright also thanked Gov. Gretchen Whitmer and the State of Michigan for working on a similar funding for backup generators at some of the county water system’s other sites.

“This will give us total water independence and security,” said Wright. “That’s we’re looking for.”

Gary Jones, who attended the groundbreaking on behalf of Gov. Whitmer, said the governor recently announced a $200 million plan to expand on the water system and to improve access to safe drinking water.

“These are long overdue upgrades to the infrastructure,” said Jones. “This project today represents giving people the help they need right now.”

Members of the Waste and Water Advisory Board from area municipalities

Mark Young, chairman of the Genesee County Board of Commissioners, was also involved in helping secured the ARPA funds and procuring the additional funding to build the new water tower.

Young said the county board looked at what it had coming in as potential money through ARPA and at how they could help municipalities throughout Genesee County. Doing something to help with the county’s water system was a use for some of the money that would benefit all residents of the county.

Young said the Genesee County Board of Commissioners agreed to the process and were happy to support it.

Commissioner Ellen Ellenburg (D-Burton) also praised the project and said she was proud to see it was going to be built in Burton.

“This site is going to add to the City of Burton. Jeff Wright came to me when we had the ARPA money and brought this proposal and I said ‘I don’t have a problem with that’ because when you are without water because the power goes down, it’s a real emergency,” said Ellenburg. “I’m glad that today we can have this site built. It will be a very good thing for the city and county.”

Wright said, weather permitting, he expects the work on the towner to be done by the fall of 2022.

Burton Mayor Duane Haskins said the groundbreaking marked a historical day because it would help bring clean, safe drinking water to not only the residents of Burton, but throughout the county.

“For people to have fresh water being provided by the drain commissioner in Burton, to be able to facilitate all the municipalities around us, in my opinion, is an honor and we’re very proud to be able to have this come to Burton and to service the other communities as well,” said Haskins.