County employees get hepatitis A vaccinations in hopes of inspiring others 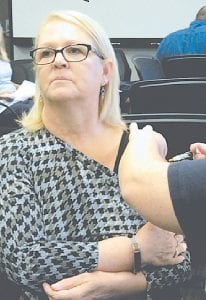 Berta Campbell, an account clerk for Genesee County Building and Grounds, was one of many county employees to get a hepatitis A vaccination July 9. Photo by Tanya Terry.

BURTON — Hepatitis A Vaccinations for county employees and county commissioners were offered at the Genesee County Administration Building July 9.

“We’ve had 21 cases of these hepatitis A cases since the outbreak officially started in Michigan back in August,” said John McKellar, health officer for the Genesee County Health Department.

“There are some states that are having hepatitis A outbreak situations,” McKellar added. “Michigan is one of those states. Kentucky is another. There was one out in California that has since resolved. So, comparing nationwide, Michigan is a state that has a high rate right now.”

According to McKellar, some people get hepatitis A and don’t show symptoms, while others have severe symptoms.

“There really is no treatment other than if you know you’re around someone who has hepatitis A and you haven’t been vaccinated, if you get vaccinated within 14 days after being around that person, that will prevent you from getting it,” he said.

Symptoms can include stomach pain, jaundice (or yellowing of the skin or eyes) and color changes in bowel and urine.

McKellar said the stomach pain and yellowing of the skin or eyes is most problematic.

“It’s especially risky for the elderly, children or those with already compromised health situations because it affects their ability to eat properly and to stay hydrated; things that would be important to good health,” McKellar said.

Eighty percent of those in the county who contracted hepatitis A after the most recent outbreak had to be hospitalized.

“The symptoms of this one are pretty severe,” McKellar said.

Hepatitis A is contracted primarily by using toothbrushes, utensils or drinking glasses that have been used by someone who has hepatitis A.

“That’s why we say handwashing is one of the best prevention techniques that people can use,” McKellar said.

Hepatitis A is passed out of the body through the feces.

“So, it’s especially important to wash hands after using the bathroom or changing a diaper,” McKellar said.

The vaccine is 95 percent effective, according to McKellar.

Hepatitis A differs from other types of hepatitis, although all forms of the disease affect the liver.

“Hepatitis C is another one we hear a lot about,” McKellar said. “That’s a chronic disease that is in the body for a long period of time. It can be treated with some medications. Hepatitis A is a shortterm, acute condition. So, it comes and it usually clears itself in a couple of weeks. There is no medication for it. People can get vaccinated for it. But, once they’ve got it vaccination doesn’t help.”

Genesee County Commissioner Ellen Ellenburg, who received the vaccination during the event, said she had Hepatitis A as a child.

“As children, you don’t realize that playing with something that comes out of the water, for instance mine was clams, can cause contamination to go to the mouth,” she said. “I was in isolation for 10 days at Hurley hospital because of that.”

Ellenburg applauded restaurants that are stepping up and having their employees immunized for hepatitis A to protect customers, such as Latina Restaurant, in Burton.

Vaccinations are available at some physicians’ offices, some pharmacies or at the Genesee County Health Department.

Insurance can be billed for these vaccinations at the county health department and because of the outbreak status, some public vaccine has been provided by the state.

“We don’t want payment to be a barrier to getting the shot,” McKellar said.