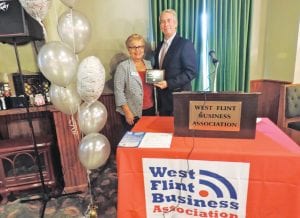 Helping the WFBA celebrate its 25th year. Leyton covered a range of topics including his 22-year membership in the organization and years he served on the Flint Township Board before moving on to the prosecutor’s office; crime fighting in Genesee County and other current affairs including the high-profile spousal abuse charges against Baltimore Raven Ray Rice.

Preceding Leyton’s speech, Flint Township Supervisor Karyn Miller gave a five-minute update on township issues and the WFBA presented its second annual Don Eve Achievement Award to David McGrain. Named for Don Eve, a former WFBA president, the award recognizes a person who has gone above and beyond to help the organization. McGrain was cited for his tireless fundraising efforts to benefit the WFBA’s annual scholarship program.

In his talk, Leyton defined the four degrees of child abuse, which are part of instructions given by a judge to a jury to weigh charges. Most involve knowingly and intentionally causing harm but vary according to the nature of the abuse and the severity of injuries.

Leyton said that under Michigan law, Peterson’s actions minimally meet third-degree abuse, which applies when a parent or guardian intentionally or knowingly inflicts some physical harm to a child.

“I don’t think the state should start telling parents how to discipline their kids,’’ Leyton said, but added that the Peterson case emphasizes the need for more public education about what constitutes child abuse.

Peterson’s son is alleged to have suffered welts and bleeding as a result of the whipping. Leyton said though Peterson as a child might have been disciplined the same way he disciplined his son, at some point “we have to educate the public on what line you cannot cross.”

As for prosecuting the case, it only takes one juror to cause a mistrial, Leyton said, likely someone who might have been disciplined the same way as a child and is not ready to convict Peterson for his actions.

As for spousal abuse, what often happens is that charges get dropped because the victim does not want to proceed, Leyton said. Many times, the victim is the only witness, making the case difficult to prove without cooperation. In the Rice case, video footage has surfaced showing the running back knocking his then-fiancée unconscious in a casino elevator.

Without such video, prosecutors would have a tougher challenge to prove the case beyond a reasonable doubt.

“Domestic violence is a serous crime and we see way too much of it,’’ Leyton said, adding that prosecution is the best way to combat it.

Leyton said his 12 years on the Flint Township Board was tougher than being prosecutor for the past 10 years because his current job is more insulated. Public service at the township level is more confrontational with residents walking into the township hall or speaking up at board meetings when they have a complaint.

Leyton said some people feel sorry for him when they learn that he is the prosecutor for a county that has for many years included one of the top-ranked cities for violent crimes. But that is changing, he said.

“The good news is we are on track this year to drop out of not only the top three but the top ten,’’ he said to applause. He credits a declining crime rate to a concerted effort on a local and state level. Despite have fewer officers, Flint Police Chief James Tolbert is doing a good job organizing and guiding a young staff, he said.

He also cited a crime-fighting partnership with Barbara McQuade, the United States Attorney for the Eastern District of Michigan, for her key role in prosecuting high level criminals.

Michigan State Police are helping combat traffic crimes and more. One out of four traffic stops involved people with outstanding warrants, he said.

Many violent players and gangs have been taken off the streets due to a concerted effort, he said.

Leyton said that being county prosecutor, is a “terrific job’ that combines his love of the law and love of public service. First elected in 2014, he is serving his third term in office.