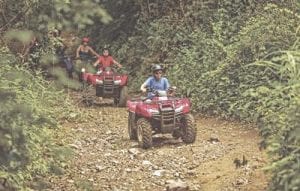 If a new Genesee County ordinance is adopted, it would fall under state law which would prohibit people under 12 from operating these vehicles. Photos provided

FENTON TWP. — The Genesee County Board of Commissioners is considering creating and adopting an ORV (off-road vehicle) ordinance in accordance with state law.

The county will hold a public hearing before the Governmental Operations Committee on Jan. 15. It begins at 9 a.m. in the Harris Auditorium on the third floor of the Genesee County Administration Building, 1101 Beach St., Flint.

If the ordinance is adopted, it would fall under state law which would prohibit people under 12 from operating these vehicles. State law also prohibits people under 18 from operating ORVs unless they have a valid driver’s license or direct supervision of a parent or guardian that has an ORV safety certificate.

“The main point is we’re trying to increase public safety and give municipalities the opportunity to participate in them,” said Shaun Shumaker, Genesee County commissioner.

When he lived on a Fenton Township lake, he said, “It’s almost scary sometimes” with ORVs, such as dirt bikes and four-wheelers, going down the road, often driven by young teens.

While the ordinance is still a draft, he’s hoping it will make county roads safer.

“I’m sure after we have the public hearing, it’ll be scrutinized more” which he’s hoping for, Shumaker said. “We’ve got to create a safe environment for not just the people using them, but for the people who don’t own them but engage with them.”

Genesee County Clerk John Gleason said the ordinance will be used to clarify the use of ORVs on county roads.

“They’re very popular machines here. There are times throughout the year when people use them because of weather, like snowmobiles,” he said, also mentioning four-wheelers with plows. “It’s nice to have some kind of parameters to clarify when they can be used.”

He’s in favor of a grace period after the ordinance is adopted.

“When you have a community-wide ordinance, then you must have an education window where you don’t ticket people. You inform and educate them about the ordinance,” he said.

In accordance with state law, the county sent notices about the adoption of an ORV ordinance to county municipalities. The Fenton Township Board of Trustees discussed it at the Monday, Dec. 2 meeting.

“It looks like they’re just looking to adopt something according to state law with ORVs to ride on county roads,” said Thomas Broecker, Fenton Township operations manager and deputy clerk.

Attorney Jack Belzer said the ordinance only applies to county roads, not subdivisions.

“We can opt out of this … we can say, ‘we don’t want this to happen within our township.’ If that passed at the county level under state law, we can opt out of it,” he said.