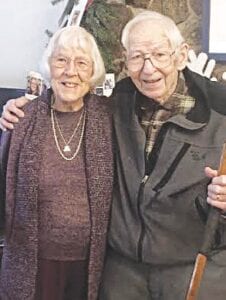 DAVISON — Jim and Marion Magyar recall Davison in a much simpler time, when they operated a jewelry store on Main Street and raised their four children in what used to be a rural community.

The couple looks back now on 75 years of marriage, celebrated on Dec. 29, and they wonder where all the time went.

“We were always busy, and time just flew by,” Marion said. “We were so busy living; time just goes by.”

Jim and Marion met and “went on a couple dates” before Jim shipped off to Word War II, where he was stationed aboard the U.S.S. Sprotson, a Fletcher-class destroyer which initially patrolled the Being Sea between Alaska and the Soviet Union.

Marion, 93, said Jim boarded the Sprotson in the Aleutian Islands and served aboard the ship during patrols and eventually went on to see combat in the Pacific Theater.

She said he was in the Philippines when Gen. Douglas MacArthur made his triumphant return and later was at the Battle of Okinawa where the Sprotson provided cover offshore for the invading U.S. troops.

“His ship was known for when our troops went in, they were posted out to sea (providing cover),” said Marion. “He saw many things go under the ship, like torpedoes.”

Jim served as a radio operator and he took code – working four hours on, four hours off. The couple stayed in touch and he returned home after the Sprotson sustained damage in combat. Marion said he was home when the war ended but had to return to finish out his tour.

Back home, Marion said she was working at Fisher Body in Flint, helping convert from wartime production back to building cars.

They were engaged at that time and while he was home, General Motors went on strike so when he had to return to the West Coast, she traveled with him. It was there on Dec. 29, 1945 they were married at the Navy Chapel in San Diego.

“When the strike was over GM notified us, but I didn’t get back quick enough,” said Marion. “So, I found another job.”

As Jim finished his Navy tour, Marion worked different jobs. Jim came home from the Navy and worked a few jobs, including at AC Spark Plug where he was on the night shift.

“That didn’t work well for newlyweds,” said Marion, describing his job at AC.

He left the shop and went to Ferris Institute, now known as Ferris State university. He studied watch repair there and when he came home, he decided to open a jewelry store in Davison.

On Aug. 16, 1948, Jim opened Magyar Jewelers in space owned by Fred Fortner, who then owned the Davison Bakery. The couple ran the jewelry store for years next door to the bakery, where often when they’d be working late nights Jim said Fortner would knock on the wall between the businesses to let him know the donuts were ready.

After 18 years in that location, the store moved to the other side of the street to the Belford Motors building where it remained until it closed in 1979 – more than 30 years after its grand opening.

Marion said Jim had an electrical license and did some electrical contracting on the side for years. She said he was something of a jack of all trades and people would come into the store and ask if he could fix things for them, especially broken glasses.

“Somebody he knew, a farmer, once brought him a milking machine in to fix,” she said. “It was known he could fix anything, and he built many of his own tools.”

After he closed the shop, Marion said Jim worked for a trucking company until his retirement.

The Magyar’s are members of the Davison United Methodist Church and Marion said she is a third-generation member.

She said they celebrated their anniversary with family but have kept everything low-key due to the pandemic.

“They had a party for us last night (Dec. 28) and they decorated the house,” said Marion. “With our children, we’ve been blessed.”