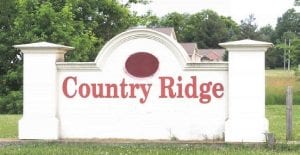 After sitting unfinished for about seven years, this is one of two unfinished houses in the Country Ridge development under court order to be torn down by September 30.

FLINT TWP. — To the casual observer, it might look like the large two-story house on Jacob’s Trail is closer to completion than demolition.

But township code enforcement officers and nearby residents hold a different view of it and other unfinished houses in the Country Ridge subdivision that they say have become blighted after sitting vacant for many years.

“Two houses are not even finished inside; they are basically just a shell,’’ said Tracey Tucker, township building inspector, while updating the Planning Commission on court proceedings to get the houses finished or torn down.

Calkins Road Development, a limited liability company based in Southfield, began building new homes in the Country Ridge subdivision circa 2004. But like many other real estate developers, they hit a standstill during a housing market crash that began circa 2008.

Country Ridge is located off Calkins road between Dye and Elms Road. Calkins Road Developers owns about 23 parcels in the area, according to county tax records. That includes nine lots on Vivian Trail, three on Noel Drive, seven on Jacob Trail and four on Calkins Road. About eight newer homes adjacent to those properties are occupied. 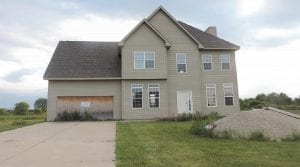 The unfinished homes have been sitting there for about seven years, Tucker said. Last year, the township took the developers to court. That resulted in an agreement to rehabilitate the houses. Building permits were pulled to do the work but nothing much happened, she said.

“We had to wait until the building permits expired to take them back to court,” Tucker said.

Back in court last week, they reached an agreement to tear down two houses and bring a third one up to code by Sept. 30.

“We will see if it is resolved at the end of the time the court gave them,” said Warren Marks, a Planning Commissioner, who represented the township in court as a code enforcement officer.

The developers previously asked for a one month grace period to evaluate the cost of rehabbing the houses, he said. After the month passed, they came back with a proposal to tear down two houses and rehab the largest one, located on Vivian Drive.

The judge established a timeframe to complete the work by Sept. 30 or the matter will be back in court by October 27, Marks said.

“They are supposed to have two torn down by then and the other one ready for occupancy by September 30,” he said.