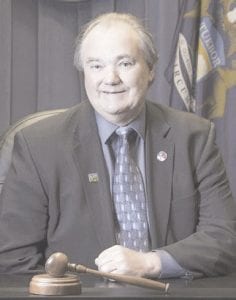 GENESEE COUNTY — At this year’s organizational meeting, the Genesee County Board of Commissioners unanimously voted Martin Cousineau as chair and Ellen Ellenburg as vice chair for 2020.

Both Cousineau and Ellenburg were unanimously elected by the commission at its Jan. 2 organizational meeting. Cousineau takes over as chairman from Ted Henry.

Cousineau, of Flushing, commissioner for District 7, said he ran for the position and added he appreciates the commissioners voting for him to serve.

“It’s a vote of confidence in me being able to lead us through some troubling and stressful times ahead,” said Cousineau. “We’re in that year, with the budget approved Oct. 1, that we’re using $10-11 million out of general fund balance to create a balanced budget. Our goal is to cut $7.5 million out of expenses this year as we develop the budget for next year.”

The county’s 2019-20 budget has been impacted by stalled revenues, growing legacy costs and increases in the cost of retiree health care. The board has already balked at implementing a county-wide hiring freeze, a move opposed only by Cousineau and Ellenburg who have both called for fiscal restraint. 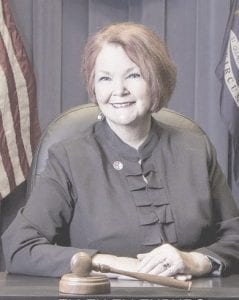 “We stressed that as we went through that budget process to limit requests from departments,” said Cousineau. “This year’s is going to be a working budget – doesn’t mean not going to continue to work on cutting expenses and we hope to not use as much of that fund balance.”

He added the commission owes the public to avoid running out of money, so the state doesn’t have to step in.

“We’re working hard to avoid that,” he said.

“I’m not a title person, but it’s important that we’re all trying our best to see that Genesee County stays viable and strong for retirees and employees,” she said. “We’ve got some new faces, some new ideas.

Ellenburg, of Burton, was elected in November 2016. She represents the residents of the third District.