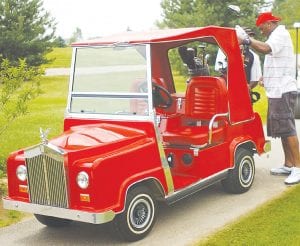 Brandon Carr, shown here with his Rolls Royce golf cart during his second golf outing to benefit the Carman- Ainsworth football program at Sugarbush Golf Club, will be hosting a football camp this Saturday at CAHS.

His camp is presented by his Carr Cares Foundation at CAHS. The oneday camp is open to kids from ages 7-18 and will run from 9 a.m.-1:30 p.m.

The camp will have the same kind of speed and agility drills that are used by both college and professional teams to improve players’ coordination and overall skill. Kids will also receive special instruction from a number of members of the NFL and coaches from the area.

Only 200 spots are available for the camp and kids can register at www. carrcares.org. All participants at the camp will get a free T-shirt provided by Under Armour and signed by Carr.