Coyotes food preferences keep them a little close for comfort 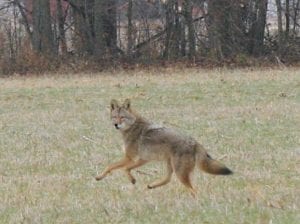 This healthy coyote was captured on film recently in Mayfield Township.

AREAWIDE
— The unmistakable howl of a coyote just the other side of my horse pasture told me that I had a varmint problem. I’ve known we had them on the property for some time, but not 110-feet outside my barn. The highpitched howl made the hair stand up on my neck and the horses stood tall and alert, the whites of their eyes visible as their fight or flight mode kicked in.

Coyotes are not uncommon in urban areas in the state, and even more common on or around farmland. Clearly, the neighbors’ free-ranging chickens and abundant supply of rabbits, both native and domestic in the area, made for a very suitable home range for the very healthy looking coyote we caught on camera. He or she uses the pond near the barns for water and when people are too close, has the creek in the woods at his disposal.

Known to also snack on small dogs, cats and other domestic animals such as small livestock when the natural choices of mice, hare and chicken aren’t available, the coyote is also legal to trap and/or hunt in the state. Private land owners also are legally allowed to shoot coyotes doing or about to do damage without possessing a small game license.

Found throughout the entire state, coyotes are most abundant in the Upper and northern Lower Peninsulas and decrease in numbers the central and southern portions of the state according to Dept. of Natural Resources and Environment data. Members of the dog family, coyotes are very adaptable and can thrive in nearly all habitat types. Like most animals, they choose areas with good food, water, and cover. Home ranges vary from 8-12 square miles. Mating pairs and their four to seven pups stick to their home range in the spring and summer months. Breeding season for coyotes begins mid-January through March.

Coyotes are typically the size of a medium German shepherd viewed from a distance and has hair coloring that varies from yellows to grays with light or cream-colored under throat and underbelly. Coyotes have bushy tails much like wolves, but a distinct difference is the way they carry a tail when running. Coyotes maintain a below the back carriage, while wolves carry theirs horizontally when running.

Coyotes can be seen day or night, but they mainly feed at night and live six or eight years in the wild. The DNRE reports that 50-70 percent of young coyotes never reaches adulthood, often being hunted or hit by cars.

Coyotes have an innate fear of people, but can become accustomed to people when intentionally fed becoming a safety risk to humans and their pets. To learn more or to seek help for coyote depredation issues, visit www.aphis.usda.gov.ws