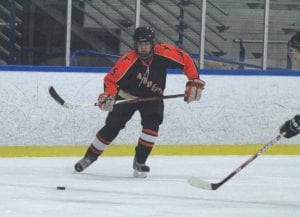 The Raiders’ record dropped to 0-7 on the season with an 8-0 loss at Flint Iceland Arena on Wednesday, despite Joe Montpas’ play during a game with one of the area’s top teams, Davison. The Cardinals scored twice in the first period before adding four more in the second and closing it out in the third with a pair of tallies. Saturday’s game at Hartland Arena against the Metro League Griffins, a co-op of Fenton and Linden, was postponed due to the severe weather. Flusing returns to action on Wednesday at Bay County Civic Arena against Bay City Central. — B.P.

EAST LANSING – The addition of a CPR certification requirement for all high school varsity head coaches highlighted actions taken by the Representative Council of the Michigan High School Athletic Association (MHSAA) during its annual Fall Meeting on Dec. 6.

Raising expectations for coaches’ preparedness is one of four current thrusts of the MHSAA’s ongoing focus on health and safety issues in school sports, and this Council action requires all varsity head coaches at the high school level to have a current CPR certification beginning with the 2015-16 school year. High schools will be required to attest that this requirement has been met by all of their varsity head coaches.

This is the second of three actions the Council is considering to enhance the preparation of coaches with respect to health and safety issues. The first action, adopted last May, requires all assistant and subvarsity coaches at the high school level to complete the same rules and risk minimization meeting requirement as high school varsity head coaches beginning with the 2014-15 school year.

The third action, scheduled for the Council’s Winter Meeting in March, would require all persons hired as a high school varsity head coach for the first time at an MHSAA member school after July 31, 2016, to have completed the MHSAA’s Coaches Advancement Program Level 1 or Level 2.

A series of proposals were presented to the Council regarding the eligibility of international students, who by an estimate from the Council on Standards for International Educational Travel (CSIET) numbered more than 3,800 in Michigan in 2012. The proposals address in part concerns over students coming to MHSAA schools for athletic reasons and the potential of undue influence to direct them to specific communities. Compounding problems in terms of competitive equity for school sports is a 1996 Federal law which allows students on F-1 visas to attend non-public schools for multiple years but public schools for only one year and only if full tuition is paid to the school. Finalized proposals could come up for vote at the March meeting.

The Council also approved the creation of a Junior High/Middle School task force to consider how the MHSAA should continue to encourage multi-sport experiences at that level while reviewing policies concerning the grade levels served – including the possibility of allowing sixth-graders to participate – and the number and lengths of contests they are allowed to play. Currently, the MHSAA serves 725 member schools at the seventh- and eighth-grade level. The task force will report to the Council within one calendar year or by its Fall Meeting in 2014.

Secchia Stadium was completed in 2011. McLane Stadium was completed in 2009 and recently was named Field of the Year by the Sports Turf Managers Association, which has recognized top sporting grounds at the professional, collegiate, schools and parks levels since 1992. A total of $6 million dollars coming mostly in gifts from their namesakes was used to construct the stadiums.

Championship weekend for baseball and softball now will begin with Semifinals on Thursday and Friday, with all four Finals games in both sports played Saturday. Previously, Semifinals for both were played Friday with multiple games in each sport played simultaneously.