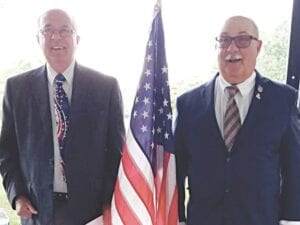 SWARTZ CREEK — Former Swartz Creek City Councilman and community activist Dennis Cramer has received the distinction of being named the 2020 Miller’s Settlement Citizen of the Year.

“I am honored and humbled by this award,” said Cramer. “Swartz Creek has always been in my heart. I’ve always been proud to call Swartz Creek my home. This is a special place with special people.”

In presenting the award, Mayor David Krueger said, “Dennis, you are an example of the far-reaching effects of what one person with a tenacity for community can do. Your accomplishments and ability to personally work to impact change, in ways small and large, physical and spiritual, represent our community at its best and extoll the virtues of the pioneering spirit of this nation and our community.”

The award is given annually to a person “whose love for Swartz Creek knows no bounds, whose hard work and accomplishments have greatly improved our community, and whose life exemplifies the very best of civic volunteerism.”

The name recognizes the contributions of the Miller family who carved the Swartz Creek community out of the wilderness.

“Challenges outnumbered the opportunities, but the pioneering spirit and work ethic of the Miller family and others prevailed,” Krueger said.

After graduating from Swartz Creek High School in 1976, Cramer enlisted in the United States Navy. He spent three years aboard the USS Stein, and was honorably discharged.

While studying at Central Michigan University, Cramer discovered a fondness for anthropology, but he re-enlisted in the Navy in 1982 and was assigned as a radioman stationed in the Azores Islands at Naval Air Facility Lajes. There, he specialized in anti-submarine communications. He later was stationed at Naval Air Facility Signella in Italy. He returned to the United States in 1986, when he was stationed in Jacksonville, Florida.

After being honorably discharged, he joined the Naval Reserve and began working in Immigration and Naturalization Services in Virginia. He later earned an associate degree in business from Lansing Community College, worked for an East Lansing law firm, and obtained a bachelor’s degree in anthropology from Central Michigan University. That accomplishment led to a job as an archaeologist in the oil and gas industry across the United States.

Cramer is a member of the Masonic Lodge in Swartz Creek and the Friends of the Perkins Library. He was instrumental in the city’s Save Our Streets campaign, which the mayor called “a huge game-changer for the entire community.”

He also assisted with the Back the Badge campaign, Restoration Place (a former sanctuary for the victims of child trafficking), the Friends of the Genesee Health Plan, and other such groups.

In 2020, Cramer single-handedly brought U.S. Census awareness to the entire community as the official Complete Count Committee chairman. His work resulted in Swartz Creek receiving a very large number of responses to the Census, which brought many more federal dollars to the community.

Outside of the Flint area, Cramer has assisted with the restoration of the Borden Building in Mount Pleasant, and the USS Edson Museum in Bay City.