Crash shuts down part of I-75 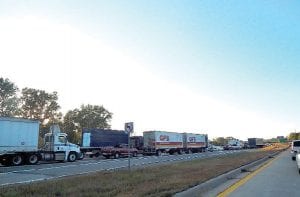 A crash Tuesday on northbound I-75 caused a huge traffic backup for miles.

FLINT TWP. — A Linden man was seriously injured in a crash late Monday afternoon that closed two lanes of traffic on northbound I-75 for several hours causing traffic backups for more than a mile.

The incident began about 4:40 p.m. when township officers were responded to a call about an injury accident on I-75 north of Miller Road, according to a police report.

Officers found the traffic crash involved a parked pickup truck on the shoulder of the roadway and a loaded car hauler semi -tractor trailer that was traveling north bound.

One lane of northbound I-75 remained closed for several hours while the crash was under investigation and work crews stabilized the semi truck so it could be removed from the roadway.

At that time, police said they did not know long the right lane of I-75 would remain closed.

No further information has been released about the identity or medical condition of the injured driver.