Longtime jeweler carves out a niche

FLINT TWP. — The jewelry customer wiggled her hand, admiring her new ring that incorporated her own gold, her mother’s diamonds and her grandmother’s sapphires.

“It is much better than I expected,’’ she raved.

“I want to hear that every time somebody picks up (their item),” he said.

He’s the creator behind Creative Jewelers, 2127 S. Linden Road, which is celebrating its 30th year in business.

• They can take broken jewelry and make it new again

• They give customers other options for their old gold besides selling it. 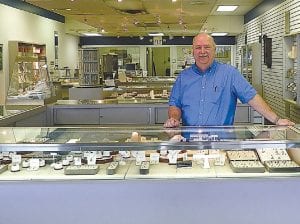 Jim Stark, owner of Creative Jewelers, is celebrating his 30th year in business including about 18 at the Lincor Plaza in Flint Township.

“If they still enjoy what they have, that is where it comes in when we say ‘your gold can last forever,” said Stark.

At those prices, jewelry customers are leaning toward silver, stainless steel or less expensive alternative medals, said Stark. It also is a reason to refashion gold they already own and a boon for a custom design store.

“We’re not a typical mall jewelry store,”’ Stark said. “We don’t’ believe in just trying to sell a product. We pride ourselves on service. We want people to come back so we give them a reason to come back.”

Prices are fair and the store also carries retail lines and makes a lot of wedding sets, he said.

Stark started in jewelry design and repair as a hobby. A graduate of the old Carman High School, he worked about six years in structural engineering after graduating from college.

“My hobby started to make more money than my (engineering) job so I got a partner and went into this full time,” Stark said.

Operations of two stores on Beecher Road and one in Mount Morris were eventually consolidated at the current location in the Lincor Plaza where Stark is now the sole owner.

Everything is made or repaired on site. Stark has seen jewelry trends come and go from big diamond cluster rings to tennis bracelets.

Valentine’s Day is coming up but the lover’s holiday does not bring a big spike in business outside of a small percent buying a ring for a romantic wedding proposal, Stark said. Gift-giving holidays like Christmas and Valentine’s Day bring in more customers but business is steady year-round, he said.

“Our return clientele is pretty high and it has to be because we have to be satisfying them for what they need,” Stark said. “We don’t mind handing out free info. Jewelry shouldn’t be a secret.”

Stark and his staff of four are planning to hold a 30th anniversary celebration in the fall but still are working on details. They can be reached at 810-732-0030.