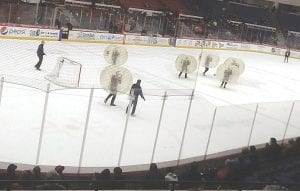 Credit union employees battle it out during a friendly game of bubble ball on the ice at Dort Federal Credit Union Event Center.

All fans with a credit union debit card, credit card or other proof of membership received a buy on get one free ticket. The credit unions also joined with the Flint Firebirds to promote literacy. The Firebirds and the credit unions asked fans to bring a new or gently used book to be placed in one of seven “Free Little Libraries” that are located throughout Genesee County and Shiawassee County.

At the end of the first period an employee from each of the credit unions joined together in a friendly game of bubble ball on the ice. — G.G.