Jack Weller hits out of the sand on the 17th hole in Monday’s Flint Junior Golf Association round at the Captain’s Club.

Jack Weller climbed over four other players to win the boys’ title, while Andrea Richards didn’t even have to play to claim the girls’ crown on the final day of the FJGA regular season at the Captain’s Club of Woodfield.

The Braun Cup was instituted this year to reward those players who shoot consistently low scores over the course of the regular season. The cup is named after a former FJGA director and tailored after the PGA Tour’s FedEx Cup format.

Weller, a 2014 Swartz Creek graduate headed for Ferris State University, went into Monday’s round in fifth place, 30 points behind leader Jordan Harris of Grand Blanc. But he shot 1-over-par 73 on a damp, chilly, breezy morning to leapfrog everyone and win the cup by 20 points over Harris. 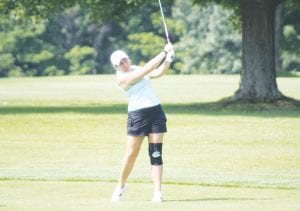 It helped that Harris didn’t play Monday, and second-place Joe Montpas and fourth-place Ben Zyber also skipped the final week of the reg- ular season. Third-place Alex Finsterwald of Swartz Creek did play but shot 81 to tie for 15th place. They were the only players in contention in the final week.

Weller didn’t win any of the three major tournaments the FJGA stages every summer, but he opened the regular season June 23 with the low score of 72 and closed it Monday with his 73 to finish the season with a 75.2 average.

“It’s pretty cool playing with the points,” he said. “Every week you have something to play for instead of just the weeks that there’s trophies given out. Every week you can come and play and shoot your best just to try and compete at the end.”

Weller also missed a week, skipping last week’s Mallon Cup Challenge to play in a qualifying event for the Michigan Junior Open. But he played strong Monday, starting with a birdie on the first hole and overcoming three straight bogeys on Nos. 3-5 to make the turn in 1-over-par 37. He played the back nine even.

Finsterwald was even-par through 10 holes but triple-bogeyed Nos. 11 and 17 and had to take unplayable lies on two holes. One of those, he said, was a shot that plugged in a sand trap just under the lip.

“I played pretty well today; I just got unlucky,” said Finsterwald. “I took two unplayable lies and kind of fell apart there.”

Finsterwald went into the day just 20 points out of the lead and needed only to finish third to clinch at least a share of the Braun Cup. That would have given him two trophies this season, coming after his victory in the Mancour Cup on July 1.

Richards, a 2013 Davison grad now playing at Siena Heights University, also had a prior commitment Monday but still clinched the girls’ title in abstentia. She went into Monday with a 35-point lead over Flushing sophomore Kerri Parks, the only player with a mathematical chance to catch her.

Parks, the girls’ Mallon Cup winner last week, needed to finish at least second this week, but shot 83 to take sixth, just two strokes out of second. Kristen Wolfe was first with a 79 and finished second in the Braun Cup by five points.

Next week’s season-ending tournament starts Monday with 18 holes of stroke play. The top eight boys and top six girls in the championship flight will return Tuesday to Swartz Creek Golf Course for 18 more holes of stroke play, after which the top two cumulative scores will return Wednesday for a match-play showdown for the title.