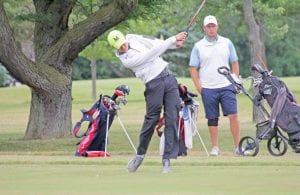 Garrett Jewell drives off the 18th tee at Flint Elks Club last week in the second round of the Mancour Cup. The Swartz Creek graduate shot 73-74-147 to finish second by three strokes.

The 2016 Flushing graduate shot 74 last Tuesday after an opening-round 70 Monday for an even-par 144 total in the Flint Junior Golf Association event. That was three strokes better than Swartz Creek grad Garrett Jewell, who carded 73-74-147, and four ahead of Holly’s Mitch Hughes, who shot 71-77-148.

In chilly, cloudy conditions, Montpas took a double-bogey on No. 14 but then birdied No. 15 out of the sand. He also withstood a bogey on 17 when he missed a four-foot putt.

“It’s really special,” he said. “I played pretty well the first round, but I was up-and-down today. I had five birdies and still shot 74. That’s not the best I can play but it was still a good score.”

Jewell trailed by three strokes going into Tuesday but challenged with long birdie putts on Nos. 13 and 15. He hit over a tree to within 10 feet on 13, then drained a 15-20-foot putt on 15.

“I was hitting the ball pretty good,” he said. “My driver was a little iffy, but I was definitely putting good.

“I just kept my head down and played my game and hoped it would come out in my favor. But I’m happy for Joe. It was fun competition.”

Jewell and Montpas will play together next year at Mott Community College, along with Grand Blanc grad Noah Troyer.

Tying for fourth place with 154 were Goodrich sophomore Trent Barth, who shot 80-74, and Flushing grad Brooke Thomas with 72-82.

Thomas had committed to a threeday tournament in the Detroit area that started Tuesday but withdrew when she made the cut for the final round of the Mancour Cup.

“I wanted to finish what I started,” she said.

The next FJGA outing will be the Mallon Cup Challenge on Monday at Warwick Hills.