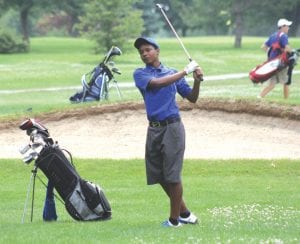 GRAND BLANC — Ben Zyber erased a two-stroke deficit over the last eight holes and pulled away to a three-shot victory this week in the Mancour Cup tournament at the Flint Elks Club.

The Swartz Creek senior shot 74 Tuesday to follow up Monday’s first-round 71 for a 1-over-par total of 145 in the Flint Junior Golf Association event.

Zyber beat Grand Blanc junior Alex Finsterwald, who held the first-round lead with a sizzling 69, but faltered to a 79 Tuesday for a 148 total. Davison graduate and Mott Community College All- American Gabe Schiller was third in the 11-man field with 74-77- 151.

Zyber shot 37 on the front nine Tuesday to tie Finsterwald for the lead at the turn. He slipped back to a two-stroke deficit with a double bogey on No. 10, but then parred the next seven holes while Finsterwald struggled with four bogeys. Zyber sealed the victory with a 10-foot birdie putt on No. 18.

The last of the FJGA’s three elite tournaments, the Henrickson Award, will be held Monday at Atlas Valley Country Club. Zyber’s older sister, Haylee, won the girls’ title in that event last year.