Crim Festival of Races on deck in Flint 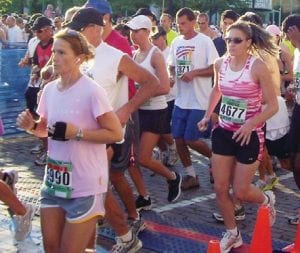 Area runners from Lapeer and Genesee counties look foward to the annual Crim Festival of Races, Michigan’s largest sanctioned road race that draws participants from across the globe.

FLINT— The annual tradition continues on Aug. 25 as the Crim Festival of Races get set to take place in downtown Flint. There is a limit set at 17,000 runners, and as of last week, nearly 6,000 runners have already registered. Top-tier American runner Deena Kastor will take part in the event, which is currently the fourth largest race in the country.

Participants will receive a New Balance Technical T-shirt, and for those racers who reside in Genesee County, they will be the recipients of a $5 discount from their registration fee, that is, if the registration is done online.

A fundraiser for the Shelter of Flint will be held the night before the races, Aug. 24, with a pasta dinner to help fill the runners with carbs for their racing excursion. It will be held at the corner of Saginaw and Kearsley from 4-8 p.m. A fee of $10 for adults and $5 for kids is required. Children under the age of six are admitted free.

There will also be a surprise appearance from former Detroit Tiger Willie Horton. Horton helped the Tigers win the 1968 World Series, as he attends along with Kastor.

The event as a whole has been around since 1977, and is a highly regarded non-profit organization and is Michigan’s largest sanctioned 10K road race. Details: www.crim.org. — B.P.