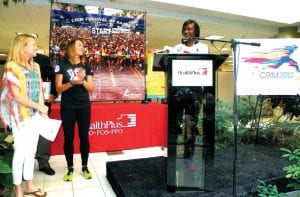 An avid boxing fan, Crim said he once refereed a fight between Muhammed Ali and Jimmy Ellis. And he brought a photo of it to share with Shields whom he praised for her jab.

Shields was one of three female Olympians highlighted at the pre-race event hosted by HealthPlus of Michigan, 2050 S. Linden Road, a race sponsor.

Joining Shields on the guest podium were Geena Gall of Grand Blanc, a 2012 Olympics 800 meter runner and Deena Kastor, the 2004 Olympic Bronze Medallist in marathon running.

“For years, sports has been male dominated but fast forward to 2012 and we are seeing an upsurge in female participation,” said Patricia Ball, CRIM race director.

For the first time in Olympic history all nations had women on their teams and nationally women outnumber men in all running events, she said.

The CRIM is no exception. About 13,500 registrations for this year’s festival of races, included a field of 56 percent women, Ball said. That’s up from only 7 percent at the first CRIM event in 1977.

In tribute to women’s increased inclusion in fitness and competition, Ball said that CRIM organizers and sponsors were pleased to present the three women Olympians to help kick off the 36th annual race event held last weekend.

In brief remarks, Shields said she has received many invitations to events since her Olympic win but is happy to support her beloved hometown.

“I like to be involved in anything that has anything to do with Flint,” she said. “I love Flint Michigan. This is where I was born and raised.”

Shields said she met a lot of awesome people during her participation in the London games, but it made her appreciate home.

She also recalled handing water to CRIM runners when she lived near Hurley Medical Center.

“I don’t think I’d ever get out there and run ten miles just for fun,” Shields said.

Gall also recalled her past CRIM Involvement. This time last year, she was getting ready to run her first ten-mile CRIM to jump-start her Olympics training, she sad.

“What better way to finish my Olympics year than to be here again at the CRIM, but instead of the ten-mile, I am running the Michigan mile which is a little closer to what I normally run,” she said.

Gall said a calf injury killed her chances at winning Olympics gold but she will try again in 2016.

She said she met Shields during the closing ceremonies at the London games and thought it “was really cool to have two women from the Flint area compete at the Olympics.”

In his closing remarks, Crim shared some highlights from the race’s history and said this one might be his last. He said he’s run about 900 races in the past 44 years.

For what might be his 36th and final run, Crim, 80, said he would be thinking of all the great runners who started with him who are now unable to run or deceased.

He also noted that it was the final year for the popular Cashew Point, an celebration spot for the past 20 years at the four-mile mark on the CRIM route. The organizers are bowing out.