Cruisers, community ‘Roll On In’ to Back to the Bricks event at GBHS

Dr. Bobby arrives at the Roll On In event in Grand Blanc. Photos by Lania Rocha

GRAND BLANC — Mike and Janette Rauch usually watch the Back to the Bricks classic car cruise from Hill and Saginaw roads, but the inaugural Roll On In brought them into downtown Grand Blanc on Wednesday, Aug. 18.

“This is better,” Janette Rauch said. “It’s fun here. We would have been here anyway, but this is an added bonus.”

Leigh LaForest, president of the Grand Blanc Chamber of Commerce, and Amber Taylor, executive director of Back to the Bricks, came up with the idea for Roll On In, held at Grand Blanc High School.

“We wanted to do something here to bring out more of the community,” LaForest said. “It’s a great way to showcase some classic cars and get the community involved. I want to do more things like this.”

The event included food trucks, music, a cornhole tournament and vendors. Roll On In provided a stopover for cruisers making their way up and down Saginaw Street.

Back to the Bricks officially began with a ribbon cutting at 4 p.m., after which grand marshal Dr. Bobby Mukkamala and NASCAR driver Erik Jones led the rolling cruise from Factory One in Flint to GBHS. 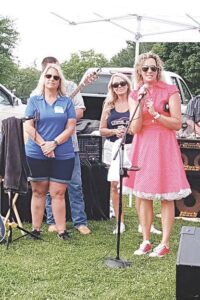 Grand Blanc Chamber President Leigh LaForest, left, and Amber Taylor, executive director of Back to the Bricks, right, greet the crowd at Roll On In.

Randy and Sue Dobbs of Swartz Creek were among the cruisers who made a pit stop at Roll On In, driving their 1969 El Camino.

“We are absolutely having some fun,” Randy Dobbs said. “It’s nice to get out and meet new people. We bought this car to drive, and it takes me back. It’s nice that Grand Blanc is on board with this. We’re enjoying the ride.”

The Rauches, who live in Byron, enjoyed the nostalgia of the parade of cars and the atmosphere.

“It’s just fun to be out here with all the people around, and everyone is friendly,” Mike Rauch said.