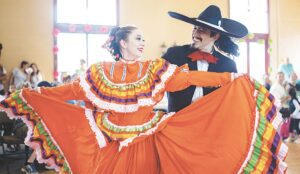 FLUSHING — For the first time ever, Riverview Park will play host to a concert featuring both traditional Mexican and Filipino music.

El Ballet Folklórico Estudiantil & Mariachi, together with the Philippine Arts & Cultural Ensemble of Michigan (PACE-MI), will host a Cultural Exchange Concert on July 25 in Flushing. The free concert will start at 2 p.m. at the Riverview Park Bandshell, showcasing folkloric dances and musical ensembles from Mexico and the Philippines.

El Ballet Folklórico Estudiantil*, a Flint-based non-profit organization, specializes in cultural preservation by teaching and presenting the regional dances and music of Mexico. The program has been in operation for over 20 years, offering dance, instrumental and vocal instruction to children and adults.

Along with presenting music and dance classes, El Ballet Folklórico Estudiantil gives students the chance to perform in concerts across the Flint and mid-Michigan areas. The July 25 show will be the program’s first concert at Riverview Park.

Sue Quintanilla, Director of El Ballet Folklórico Estudiantil, said that the concert will feature Mariachi music and authentic folkloric dances from the state of Jalisco and the Revolution of 1910—complete with dancers in traditional costumes. Mariachi music will be played on the traditional instruments of violin, trumpet, guitarrón, the guitar and the vihuela (the vihuela and the guitarrón are instruments that have evolved from the Baroque lute.)

“This will be a unique opportunity for Genesee County residents to enjoy the cultures of the Philippines and of Mexico,” Quintanilla said. “Never before have the two groups performed together. We hope that it will be the first of many occasions.”

PACE-MI, a non-profit based in Ann Arbor, offers community-based programs and resources in Filipino arts and culture for children and adult students alike. The organization passes down Philippine cultural heritage primarily through a folk dance program, an indigenous Kulintang (gong and percussion) ensemble and the Rondalla, an orchestral ensemble of tremolo-stringed instruments brought from Spain to the Philippines.

Gean Almendras, Vice President and co-founder of PACE-MI, said that his group will give a variety of performances from different eras of Filipino history, starting with music and dances from the Spanish colonial era. PACE musicians will then present traditional and rural folk music, along with American pop hits from the 1950s and 1960s.

“One of the reasons we’re doing this show is to highlight similarities between our cultures,” Almendras said. “The Philippines and Mexico, of course, were both former colonies of Spain and there was a lot of interaction between the two colonies through Spanish trade routes. Cross-culture exchange happened as a result, with language, food and music.”

El Ballet Folklórico Estudiantil and PACE-MI will also be taping Sunday’s concert in Flushing for a cross-cultural concert video, which will debut in October to coincide with Hispanic Heritage Month (Sept. 15 to Oct. 15) and Filipino American History Month in October.

In addition to its concert presentations, El Ballet Folklórico Estudiantil will offer traditional folkloric dance and Mariachi music this fall, both online and in-person. Classes will take place at Our Lady of Guadalupe Church in Flint.

*This program is supported in part by the Greater Flint Arts Council Share Art Genesee Grant program made possible by the Genesee County Arts Educations and Cultural Enrichment Millage Funds. Your tax dollars are at work!