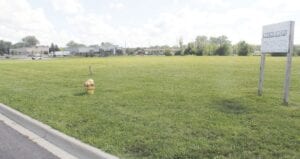 The new Culver’s Restaurant will be built in this parcel next to Menard’s. Photo by Gary Gould

DAVISON TWP. — The planning commission has approved the rezoning of 1.6 acres at Irish Road and Court Street, on the Menard’s site, for construction of a Culver’s restaurant.

Supervisor Tim Elkins said approval of the Culver’s project is the culmination of nearly five years of negotiations with the national chain to bring one of its restaurants to the township.

“We’ve been working with them 4-5 years now,” he said. “They originally wanted to be on M-15, but no parcel fit. Then last year we spoke with them and they were trying to find other locations. They found one on M-15, but couldn’t work a deal, so they were back looking at Irish Road.”

Elkins said the company then negotiated a land purchase for a lot at the Menards site, near the corner of Irish Road and Court Street.

Both Menards and Culver’s will use the same driveway off Court Street, he said.

With the approval from the planning commission, Elkins said they are waiting on county approval now to get the permit process started.

“We’re excited they’re going to be here,” said Elkins. “If they get their permitting, they should start relatively soon.”

According to the Culver’s website, the company was founded in 1984 by Craig and Lea Culver, along with Craig’s parents George and Ruth, when they opened the first Culver’s in the family’s hometown of Sauk City, Wisconsin.

The restaurant chain is known for its famous ButterBurgers and Frozen Custard. There is a location in Grand Blanc and another in Lapeer.