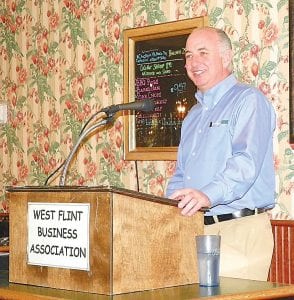 FLINT TWP. — The mild winter created challenges for Curbco — a weather-dependent local business — but not the way most people think.

“I can honestly tell you that with all of the snow we had last year, which was the third snowiest winter in Genesee County history, we had less issues to manage than we did in a mild winter like this,’ said Keith Kirby, Curbco president who was guest speaker last week at the monthly meeting of the West Flint Business Association.

Kirby said that weather impacts all four of his company’s divisions — snow and ice removal; sweeping and power washing; pavement and construction and landscaping and horticulture.

“The easiest way to describe Curbco is we are structured just like a department of public works,” he said of the 26-year-old company located at 3146 South Dye Rd. in Flint Township.

Curbco was contracted in 2011 by the Genesee County Road Commission for a three-year snow removal pilot project in Flint Township. Curbco assists county road crews in clearing streets in subdivisions and industrial parks and on non-secondary roads when there is five or more inches of snow.

Curbco was called out twice last year but none this year. A lack of heavy snow idled Curbco’s seasonal employees, which is about one third of the company’s workforce, and made ordering supplies difficult.

Ironically though, Curbco was not left with mountains of unused salt which has to be pre-ordered. Actually, salting was down only about 5 percent this year, Kirby said. Snowplowing is what took the big hit — down by 50 percent in Genesee County and as much as 80 percent in the Detroit Metro area, Kirby said.

The trend began Nov. 30 with the first slushy mix of rain and snow. A heavy rainfall came within a hair’s breadth of being two feet of snow had temperatures dropped below freezing, he said.

“We received close to the same amount of precipitation this winter but it came as rain,’’ Kirby said.

“When we plow the roads for Flint Township, we use $1.25 million in equipment to perform the task,’’ Kirby said. “Pull up the record of what they pay us and that (will show) a pretty good return on your investment … versus owning your own equipment.”

Curbco is a Michigan Department of Transportation approved contractor serving clients as small as banks, large as highways and everything in between including churches, commercial complexes, condo associations, industrial parks, municipalities, retail centers, school campuses and sports complexes.

Though based locally, Curbco does 40 percent of its business outside of Genesee County, he said.

Curbco’s parent company was established in 1985 and Curbco was formed in 1996. Curbco currently employs 50 full-time workers year-round and usually doubles that amount with seasonal winter employees.

Curbco also had to make adjustments when its soil erosion division lost $1.75 million in revenue between 2005-08 due to the construction industry downturn, Kirby said.

He also spoke briefly about storm water pollution. Homeowners can help by being careful about yard work cleanup and only washing cars with environmentally friendly products, he said.

Commercial and industrial concerns also have a role to play. He spoke of one company pouring paint down storm sewers under the false impression a little bit doesn’t hurt.

Many people are unaware that everything that runs into storm drains eventually ends up in the Great Lakes, he said, adding Curbco has conducted seminars about better storm water management but more educational efforts are needed.