Cyclist killed in I-69 crash 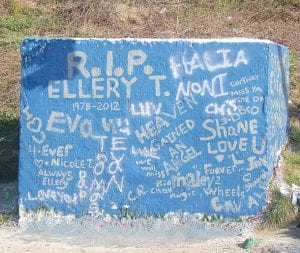 FLINT TWP. — The landmark “rock” at 12th and Hammerberg streets in Flint was painted last weekend in memory of Ellery Allan-Ray Thomas, 33, a Flint Township man who was killed April 19 when the motorcycle he was driving collided with a semi-truck on I-69 east of I-75.

Police responded at about 3:05 p.m. to reports of a personal injury accident on the freeway and arrived to find Thomas fatally injured. He was pronounced dead at the scene.

On Friday, police arrested a second motorcyclist who had been riding in tandem with Thomas just before the crash.

A police investigation found that both motorcycles were exiting the north/south bound I-75 ramp onto eastbound I-69. The lead motorcyclist passed a pick-up truck on the right and then motioned to the rider later identified as Thomas. Thomas passed on the inside lane around the pick-up truck, crossing over the merger paved divider and colliding into the side of a semitanker truck. —Rhonda Sanders