D.L. Hughley comes to The Whiting 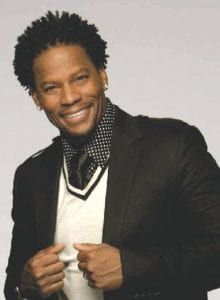 FLINT — The Whiting is pleased to present one of the most popular and highly recognized stand-up comedians on the road today, D.L. Hughley, in concert on Oct. 13.

Tickets are on sale now and range from $19-$45. Tickets can be purchased online at TheWhiting.com, by phone at (810) 237-7333 or (888) 8- CENTER or by walk-up at The Whiting Ticket Center. The Whiting is located at 1241 E. Kearsley Street in Flint, just off I-475 between the University of Michigan Flint and Mott Community College on the Flint Cultural Center campus.

D.L. Hughley served as host of his own late night talk show on CNN “D.L. Hughley Breaks the News.”

Proving he could, indeed break news, Hughley was able to uncover startling, news-making comments from such guests as former White House press secretaries Scott McClellan and Ari Fleischer, as well as a recent controversy-stirring comment from RNC chair Michael Steele.

Hughley’s creative arsenal is nonstop. He starred as “Simon Stiles” on the Aaron Sorkin drama series for NBC “Studio 60 on the Sunset Strip” and hosted the popular BET hidden camera reality series, “S.O.B. Socially Offensive Behavior”. In 2006, D.L. also starred in his own HBO comedy special entitled “Unapologetic”. The special, which aired on HBO to excellent reviews, is now available on DVD.

Following the success of the special, D.L. went on to host the second season of HBO’s “Def Comedy Jam” and served as host of the BET Awards in 2008.

Hughley spent four successful years starring in his own sitcom “The Hughleys,” and showed no signs of slowing down. It was the mega-hit Original Kings of Comedy that launched him into superstardom. The film, based on the 1999 tour featuring D.L., Bernie Mac, Steve Harvey and Cedric the Entertainer, garnered close to $40 million at the box office and became one of the highest selling DVDs in 2001.

Hughley took a serious turn with his work, starring in the drama Shackles. Hughley wowed audiences in 2001 in The Brothers, co-starred in Cloud Nine opposite Burt Reynolds, and also starred in the film Doubting Thomas.

D.L. has undoubtedly proven himself as one of the hardest working men in showbiz. In addition to his growing TVand film resume, D.L. continues his reign on the standup comedy front, filling out concert halls and headlining comedy clubs across the country.

The Whiting is a member organization of the Flint Cultural Center Corporation and is dedicated to bringing the performing arts to the community. The Whiting is a nonprofit organization and an Equal Opportunity Employer providing programs and services without regard to race, color, religion, national origin, sex or handicap. — G.G.