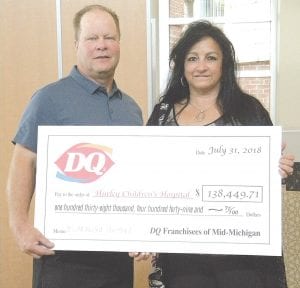 The owners of the Clio and Birch Run Dairy Queen, who are huge Children’s Miracle Network supporters, recently gave a check for a significant amount to Hurley Children’s Hospital. Photo by Tanya Terry

“It’s all about the kids,” said Steve Hughes, who owns the Clio and Birch Run Dairy Queen with his wife, Charron Hughes

“When we got a tour, I found it was unbelievable what Children’s Miracle Network does for those kids, Steve Hughes added. “It’s all about the kids.”

Steve and Charron Hughes won a contest through Dairy Queen International to donate money from a silent auction to the Children’s Miracle Network of their choice. They chose their hometown hospital, Hurley Children’s Hospital.

“Kids just need a chance to grow up and live a normal life,” Steve Hughes said. “I try to give them all the help I can.”

The Hughes’ oldest son was in the neonatal intensive care (NICU) unit in 1987. He was at another hospital and had to be shipped to Hurley.

“Hurley is the best around for kids,” Steve Hughes said. “My son is doing great now. He’s 30 years old. You would never know he had to be in the NICU unit.”

The Hughes both grew up in Clio and consider all of Genesee County their “hometown.” They considered it exciting to, therefore, give back to Hurley.

“With all the negativity going on in our area we needed some positive,” Steve Hughes said.

Although Steve Hughes said he has not had a lot of interaction with children with special needs, children and families receiving services from the Hurley Children’s Hospital have visited their business to talk about what Children’s Miracle Network does. Steve Hughes said the customers loved the kids.

“They were just so upbeat despite the sickness they had,” he said. “They were just contagious kids. They made you smile. Now, those kids are all grown up.”

Hurley has received almost $140,000 from Dairy Queen. The money will be used on a special Vecta machine which will help children with special needs feel comfortable in the hospital, allowing them to control the sights and sounds in their own rooms, easing stress. The money will also help provide gaming units and DVD players for patient rooms. Every child in Hurley Children’s Hospital will get a coloring book and crayons to help pass the time.

“Kids get worked up about going into unfamiliar areas,” Steve Hughes said. “I think it’s a great thing they will be able to go in there and feel relaxed. If they’re not relaxed, it makes it harder on everyone. I also believe you need to keep kids busy and keep them positive.”

Dairy Queen was also the title sponsor for the DQ Miracle Picnic July 31. The picnic allowed families who had gone through our NICU to come together, share a meal, play games, do crafts and have a great time. Steve Hughes considered it a “top notch deal” to help keep kids’ minds off their sickness and give them a day of joy.