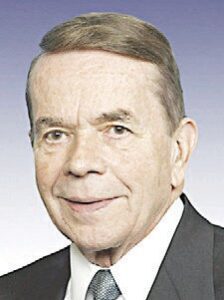 GENESEE COUNTY — Former U.S. Rep. Dale E. Kildee, a native of Flint, will be remembered for his strong representation of his constituents, as well as his kindness and civility in the political field.

Before that, he served as both a state senator and representative. An advocate for the rights of working people and the importance of education. He exemplified the fighting spirit of his Flint community.

His nephew, Dan Kildee, succeeded him in Congress.

Local officials across Genesee County are thankful for the work that former Congressman Dale Kildee did throughout his life.

According to a statement released by Dan Kildee, Dale was born into a large Catholic family that cherished its Irish heritage.

Kildee was passionate about education having started his career as a teacher at Flint Central High School. There he met a fellow teacher and the love of his life, Gayle.

After leaving his job as an educator, he served in the Michigan State Legislature and U.S. Congress, the statement continued.

Kildee was one of the longest serving members of Congress in U.S. history, having served for 36 years and being re-elected 18 times.

He served as a senior member on the House Committee on Education and Workforce and was a founding member of the Native American Caucus in Congress. Kildee was dedicated to helping educate others on the important obligations between the federal government and Tribal Nations across the United States.

The statement from Dan Kildee’s office said Dale will be remembered for his many accomplishments throughout his time in Congress, but especially his work on supporting childhood education through Head Start, reforming the No Child Left Behind initiative, and his efforts to promote nutrition programs for our nation’s children and seniors. He was dedicated to addressing hunger in the United States, establishing the first of its kind summer nutrition programs in churches so kids wouldn’t go hungry.

“Dale was a fierce representative of his constituents,” said Dan Kildee. “He worked tirelessly for the residents of his district and brought civility and kindness to the political debate, something that we could all learn from today.

“The Kildee family has lost a wonderful member of their family, and Michigan has lost an incredible public servant.”

“Dale Kildee was truly one-of-a-kind. For 18 terms, he brought a certain Flint brand of leadership, humility and humanity to the halls of Congress. He will be remembered as a guardian of our auto industry, a dedicated educator and an advocate for Michigan’s Native American communities,” said Senate Minority Leader Jim Ananich (D-Flint). “Dale was one of my early political heroes who later became a valued mentor and friend. Andrea and I send our love to everyone in the big Kildee family, and we hope they find peace knowing that he brought so much good to our community, state and country.”

“Dale was as good a person as he was an effective elected official,” said state Rep. Cynthia Neeley (D-Flint). “His leadership will be missed, but all of those he encouraged to get involved in politics will continue to do the important work which he dedicated his life to.”

“Dale Kildee was a true public servant who genuinely cared about his constituents,” said state Rep. John Cherry (D-Flint). “His legacy can be seen in the lives of all the people he helped, whether through his work in Washington or when walking the neighborhoods of the communities he represented. I will always remember the values he espoused whenever I saw him speak: a fundamental respect for human dignity. I will miss Dale and I hope we will continue his legacy.”

“I have worked in politics for decades and there have been few people more talented than Dale Kildee,” state Rep. Tim Sneller (D-Burton). “I am beyond thankful for the contributions he made to Genesee County and the mentorship he provided to so many who wanted to make a difference. His family should take pride in the fact that he made a difference in the lives of others every single day.”

Dale Kildee leaves behind his loving wife, Gayle, and their three adult children, Paul, Laura, and David, and grandchildren.