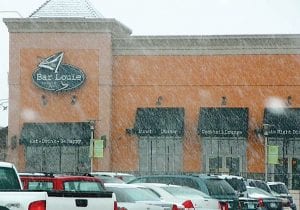 FLINT TWP. — Dining room space at Bar Louie could be getting tighter in coming months but the fun on tap will get broader.

Entertainment and dance permits recently granted to the business by the township Board of Trustees will allow it to use part of its dining room floor for dancing and entertainment.

The upscale bar and grill located at the Genesee Valley Center shopping mall, 4360 Miller Rd., already is a popular after-hours gathering spot for many.

Bar Louie management declined to comment but details provided on the application for entertainment list comedy acts, bands and closed circuit television as some of the possible uses being considered.

The application stated that a portion of the dining area would be allocated for performances but featured acts would not require dressing rooms nor booking through an agent.

A separate dance permit issued states that a portion of the dining area will be cleared for a dance floor during special events. The dance floor cannot be smaller than 10 feet by 10 feet.

Bar Louie representatives paid annual fees of $100 each for the dance and entertainment permits.

The Genesee Valley Bar Louie location is part of a national chain operated by Bar Louie Operations based in Addison, TX. It opened in Oct. 2006 as part of the mall’s then newly built Outdoor Village wing.

It is not known when Bar Louie will implement the latest changes but they are plugging plans to throw a New Year’s Eve party.

Bar Louie is a member of the Swartz Creek Chamber of Commerce and also was the host site for its November Creek Speaks after-hours networking meeting.