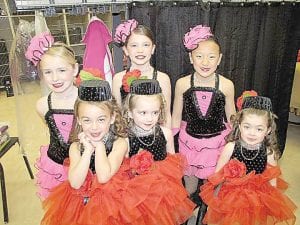 The Broadway Babies first overall out of eight other dance and Chatanooga Shoe shine boy Platinum award and second overal out of 12 group.

SWARTZ CREEK — Smooth Steps Dance and Gymnastics of Swartz Creek finished their competitive season with the great honor of their gymnastics dance Because We Can being chosen as the “Video of the Year “at the Rainbow Connection Competition held in Grand Rapids on April 30.

They only choose one out of more than 200 acts. This act will be on Facebook for votes and hopefully will be honored as the Video of the Year from all over the country. All the competitive teams also competed at the VIP competition held in Grand Rapids on April 15.

The teams consists of girls ages 4-18 and are divided into teams of tiny, mini, Junior and Senior.

The team will be traveling to Florida in June to perform at Disney World. Instructors for the teams are Alison Willison, Gail Kivett, Niki Gilbert, Heather Stanley, Danielle Abdella, and Felecia Harchik.

The team will be heading to Orlando, Florida to perform at Disney World in June and is getting ready for its annual Spring recital New York. Tickets are on sale May 16. — G.G.