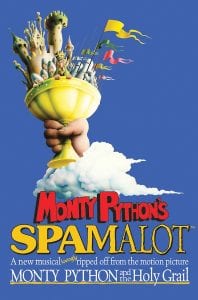 FLINT
— Think you know the Legend of King Arthur? Well, be prepared to have the age-old tale about the Knights of the Round Table flipped upside down when Monty
Python’s Spamalot
comes to The Whiting for two, 8 p.m. performances Oct. 21-22.

Spamalot, which won a Tony Award for Best Musical in 2005, prides itself on being “lovingly ripped-off” from the internationally famous comedy team’s most popular motion picture, Monty Python and the Holy Grail. Based on the Tony Award winning direction of Mike Nichols and the riotous choreography of Casey Nicholaw, Monty Python’s Spamalot features a book by Eric Idle, based on the screenplay of Monty Python and the Holy Grail by Monty Python creators Graham Chapman, John Cleese, Terry Gilliam, Eric Idle, Terry Jones and Michael Palin, with music and lyrics by the Grammy Award-winning team of Mr. Idle and John Du Prez.

Telling the legendary tale of King Arthur and the Knights of the Round Table, and their quest for the Holy Grail, Monty Python’s Spamalot features a chorus line of dancing divas and knights, flatulent Frenchmen, killer rabbits and one legless knight.

The cast of Monty Python’s Spamalot.

“The show taps into a part of your brain that makes you laugh. It’s a quick show that’s fast-paced and uplifting” said actor Thomas DeMarcus in a phone interview. DeMarcus plays the historian, a French knight, minstrel and priest in the production.

Spamalot started its run approximately two weeks ago in Connecticut and so far, DeMarcus said audiences have enjoyed the show. “The opening performances have been great,” he said. “Everyone has a great time. We’re selling out each performance.”

DeMarcus, who hails from Nashville, Tenn., began his theatrical career 10 years ago. This season marks the first time he has performed in Spamalot; he previously toured with The Pajama Game.

While it is hard to pinpoint one particular scene in Spamalot that stands out from the rest, DeMarcus said one of his favorite moments is at the end of Act I when the British knights are at the French castle.

“There is so much chaos. The scene only lasts three to four minutes, but you’ll always see something new when you see the scene repeatedly,” he said.

“It’s sort of like Moulin Rouge where every corner of the frame is filled with something.”

Unlike most cities that only get one night of a performance, Flint and the surrounding communities will have two opportunities to view the awardwinning musical.

Even those who are unfamiliar with the British comedy troupe’s work should not be deterred from checking out Spamalot.

“Even if you don’t know Monty Python, you will enjoy it,” he said. “The show is definitely all ages, and for people across the board. The whole show is clean and for everyone.”