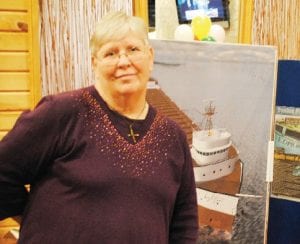 Pam Johnson, daughter of Chief Steward Robert Rafferty, stopped by BD’s Mongolian BBQ Nov. 9 for a special event marking the 35th anniversary of the sinking of the Edmund Fitzgerald. Rafferty was one of the 29 crew members who lost their lives on the ship.

FLINT TWP.
— Thirty-five years ago, the S.S. Edmund Fitzgerald sank several miles off the coast of Whitefish Point in Lake Superior. The ship, which reported shipboard problems on the afternoon of Nov. 10, 1975, and sank without one word of distress shortly after 7 p.m. that night.

In remembrance of the crew and ship, Pam Johnson, daughter of Chief Steward Robert Rafferty, came to BD’s Mongolian BBQ Nov. 9 for a special memorial event and to promote the Edmund Fitzgerald.

At the event, Johnson, who lives in Abilene, Kansas, brought along souvenirs from her father, including his 1942 cookbook, photos and his union card from when he became a sailor. She also brought along a letter dated 1977 to her from singer Gordon Lightfoot, who memorialized the ship and her father in the song, “The Wreck of the Edmund Fitzgerald.”

Rafferty initially was not supposed to be on the Edmund Fitzgerald. Rafferty was replacing two sick chief stewards on the ship, assigned to fill the position for the last trip of the vessel from Wisconsin to Detroit. Johnson, who was eight months pregnant when she learned of the sinking, read about it in The
Columbus Ledger
while living in Columbus, Ga.

Roscoe Clark of Flint Township, who was responsible for bringing Johnson to the event, said a memorial event for the Edmund Fitzgerald takes place each year and memorial services can be viewed online at www.ssedmundfitzgerald.